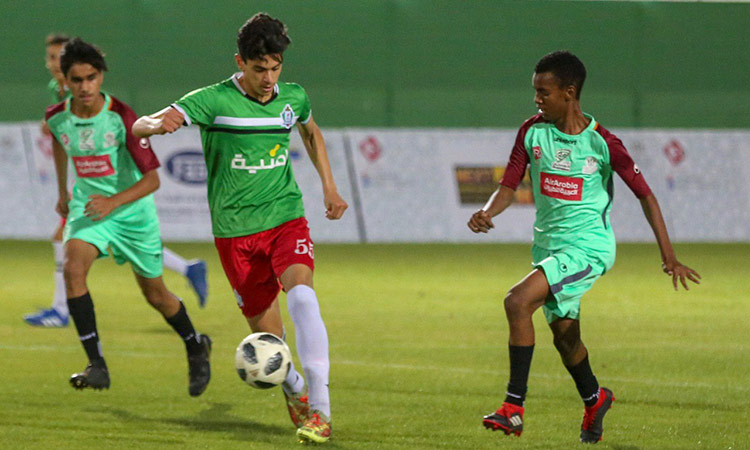 Players in action during a Sharjah Club International Tournament match.

Despite enjoying a majority of ball possession, Al Wasl failed to break the deadlock. Sharjah Club also had chances in the second-half but failed to convert any.

Earlier on Sunday, Sharjah Club and Egyptian club Zamalek played a goalless draw. Both teams tried hard to gain an upper hand during the match but tough defence and alert goalkeepers from Sharjah and Zamalek thwarted all the attempts.

Bouncing back from the opening day drubbing, Khorfakkan downed Al Wehdat of Jordan 3-0.

Khorfakkan started well and were 1-0 up after few minutes of the game. Later, two goals in the second-half helped Khorfakkan grab full points.

Sponsored by Sharjah Sports Council, Sharjah Sports Club, Fast Building Contracting Company and Air Arabia, the nine-a-side U-14 tournament kicked off on Saturday and has attracted teams from UAE, Egypt and Kuwait.

Hailing the level of the tournament, Haddad said: “The popularity of the event has been rising steadily over the years.

“Through this championship, many young soccer players are being groomed to excel in national and regional competitions, across sports disciplines,” added Haddad, who played for the UAE at the 1990 FIFA World Cup finals.

He has also played as a centre back for the Sharjah club. Tournament director Tareq Salim Abdullah Saeed Al Khanbashi was pleased with the response the competition evoked from junior teams from across the UAE, Egypt and Kuwait.