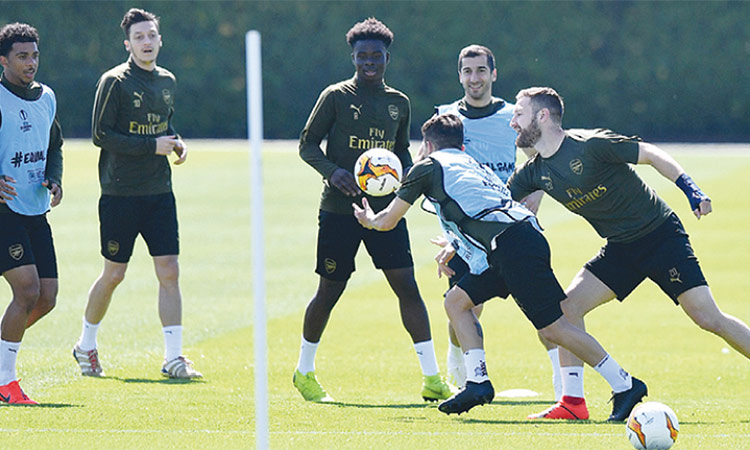 Arsenal players attend a training session in London on Monday, ahead of their Europa League final against Chelsea on May 29. Agence France-Presse

Olivier Giroud is relishing the prospect of beating his old Arsenal team-mates when he lines up for Chelsea in the Europa League final in Baku on May 29.

The 32-year-old French World Cup winner’s move across London 18 months ago has failed to deliver the regular first team football he hoped after falling behind compatriot Alexandre Lacazette and Pierre-Emerick Aubameyang in the pecking order at Arsenal.

However, he has played a huge part in the Blues run to the Europa League final and is the joint top scorer in this season’s competition with 10 goals.

“I always like playing against my old teams,” Giroud, won three FA Cups in five-and-a-half years at Arsenal, told the Daily Mail.

“It’s going to be tough, and it could be painful if it’s not going the right way, but you have to put the feelings and memories aside.

“I enjoyed the years I spent there. It has been a big part of my career, my first club in England and it will always be special, but now I feel my blood is blue. The same as the national team, blue suits me well.”

Giroud, who on Tuesday signed a one-year contract extension with the Blues, says he found no problem in fitting in with his Chelsea team-mates following his reported £18million ($22.9 million) transfer.

“I settled in quickly. I felt like part of the family straight away,” said Giroud.

“I knew a few of the players and I’m a sociable person, I always try to communicate.”

Meanwhile, Arsenal’s Armenian midfielder Henrikh Mkhitaryan will miss the Europa League final in Baku amid fears over his safety. Mkhitaryan’s well-being was a concern for Arsenal due to the tense political dispute between Armenia and final hosts Azerbaijan. The Premier League club have decided against Mkhitaryan travelling with the rest of Unai Emery’s squad for next Wednesday’s game.