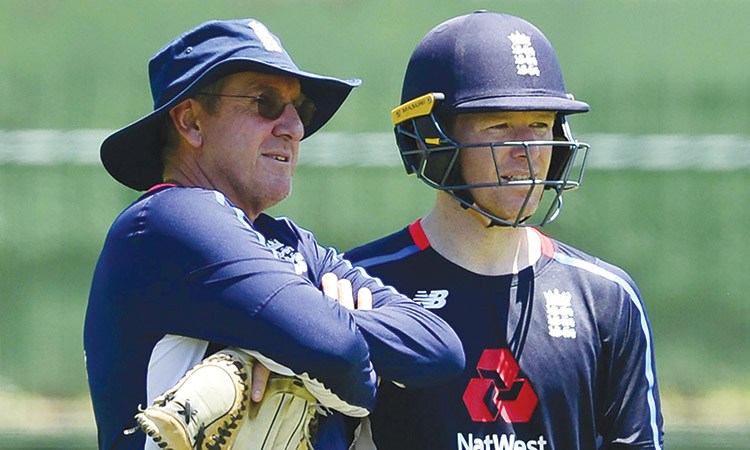 Leeds: The final places in England’s World Cup squad could come down to the personal preference of white-ball captain Eoin Morgan, according to coach Trevor Bayliss.

Tournament hosts England, bidding to win the World Cup for the first time, have risen to the top of the one-day international rankings since their dismal early exit at the 2015 edition in Australia and New Zealand.

And having completed a 4-0 ODI series defeat of Pakistan at Headingley on Sunday, they appear to be confident about the bulk of their World Cup squad, with national selector Ed Smith announcing the chosen 15 at Lord’s on Tuesday.

But there still seems to be some doubt about the identity of at least one of England’s bowlers for the tournament.

Do they need a back-up slow bowler to supplement the leg-spin of Adil Rashid and the off-breaks of Moeen Ali? If they do, is that man Joe Denly -- who has spent much of his county career as a specialist top order batsman but used as a spin-bowling all-rounder against Pakistan or Hampshire left-armer Liam Dawson, who did not feature in the recent series.

Another question the selectors will have to consider is whether David Willey, the only left-armer among England’s seam-bowling options, has done enough to see off the late charge of newly-qualified Sussex quick Jofra Archer.

Willey, Denly and Dawson could all be vying for one place, with the decision facing Smith, fellow selector James Taylor and Bayliss -- also a member of the panel -- by no means straightforward.

But with Morgan possibly having to put his trust in one of the trio at what could be an important stage of the tournament, Bayliss said the skipper’s view could yet be something of a casting vote.

“If it got down to a bit of a stalemate in discussions, in the four years that I’ve been here the captain gets a big say,” said Bayliss ahead of the final selection meeting.

“He’s got to be the one comfortable with going out on the field with the other 10 players. The captain has a very big say.”

The Australian added: “Unfortunately one or two guys have to miss out.”