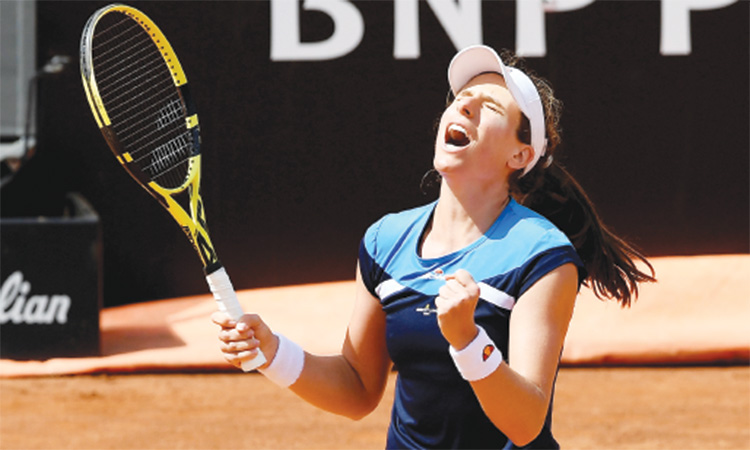 Britain’s Johanna Konta exults after winning her semi-final match against Kiki Bertens at the Italian Open on Saturday. Reuters

Defending champion Rafael Nadal swept past Greece’s Stefanos Tsitsipas 6-3, 6-4 to advance to his first final on clay this season at the Italian Open on Saturday.

The eight-time Rome winner had been stunned by Tsitsipas, seeded eighth, in the semi-finals at the Madrid Open last weekend.

But the 32-year-old Spaniard was clinical on the red clay of the Foro Italico winning through in 1hr 42min to maintain his record of having not dropped a set this week.

Meanwhile, Britain’s Johanna Konta said she felt like “a light bulb had gone off” as she rallied past world number four Kiki Bertens 5-7, 7-5, 6-2 to seal her second final on clay at the Italian Open on Saturday.

Konta, ranked 42, sealed victory on her fourth match point against sixth seed Bertens, winner of the Madrid Open last week, after almost three hours on the red clay of Rome.

Dutchwoman Bertens had advanced to the semi-finals after world number one Naomi Osaka of Japan retired with a hand injury before their match Friday.

Earlier, world number one Novak Djokovic saved two match points against former US Open champion Juan Martin Del Potro to advance to the semi-finals of the Italian Open in a three-set Roman thriller on Friday as defending champion Rafael Nadal swept through without dropping a set.

But Swiss star Roger Federer and women’s world number one Naomi Osaka both pulled out injured from the last warm-up tournament before the French Open starting in just over a week.

Djokovic saved match points in the second set tie-break before winning through 4-6, 7-6 (8/6), 6-4, sealing victory with an ace on his first match point after a three-hour battle.

Del Potro had pulled out of Indian Wells and Miami with a knee injury, but matched Madrid Open winner Nadal shot for shot, wrapping up the first set 6-4 in just over an hour.

Eight-time Rome champion Nadal eased through 6-4, 6-0 against fellow Spaniard Fernando Verdasco to set up a rematch with Greek rising star Stefanos Tsitsipas for a place in the final. 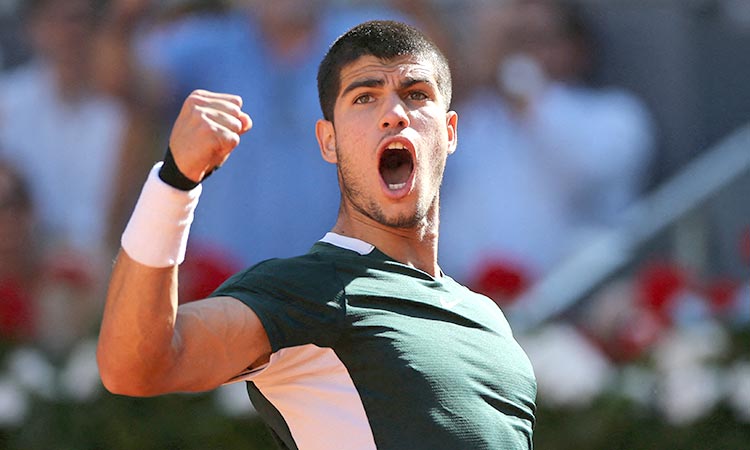 The 19-year-old Spaniard reached his second ATP Masters final in five weeks and claimed his first ever win over a reigning world number one, overcoming Djokovic 6-7 (5/7), 7-5, 7-6 (7/5) in front of a sell-out home crowd at the Caja Magica.