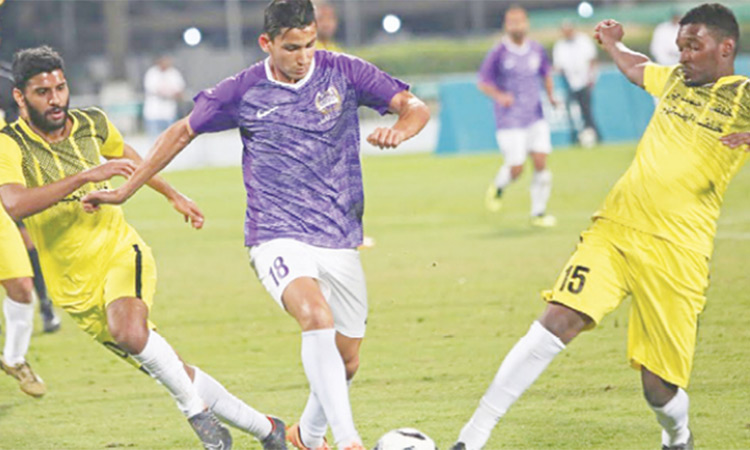 Players of Al Habtoor and UAE Association for Universities in action during their Maktoum Ramadan Football Championship played at the Dubai Police Club.

Osama Al Shehhi and Haytham put UAE Association for Universities ahead in the first half. Al Habtoor managed to reduce the deficit with the start of the second half through Abdulla Al Mansouri.

Dnata posted the first win of the tournament following their 2-1 win over National Paints.

In another match, Al Ain’s chances of getting through to the quarter-finals were dashed after being thrashed by Nice FC 1-5.

Nice FC dominated the proceedings from the beginning and were 3-0 ahead in the first half. Ali Al Dhahiri scored the lone goal for Al Ain.

A total of 19 teams are taking part in the tournament that is being held in Holy Ramadan since 2011 in the memory of late Sheikh Maktoum Bin Rashid Al Maktoum. After the preliminary rounds, the top two teams from each group will advance to the knock-out quarter-finals.

The championships are under the patronage of Dubai Investments Park, approved by the Dubai Sports Council and organized by YalaSports at the new DIP soccer ground, launched specially for the tournaments to be held until May 26.

The new soccer ground has been designed to enhance sporting activity in the community and to promote the health and wellness of the residents and the companies within the park.

DIP aims to provide a platform for various entities operating in the community to come together and foster a spirit of cooperation.