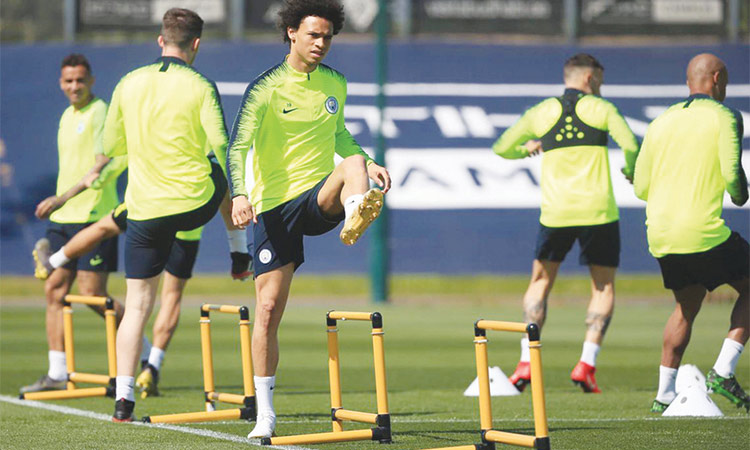 Manchester City players attend a training session ahead of their FA Cup final against Watford.

Manchester City are on the brink of a domestic treble, with only Watford standing in their way in Saturday’s FA Cup final, but a potentially historic season risks being overshadowed by several probes into the club’s off-field conduct.

City became the first side in a decade to retain the Premier League title last weekend, holding off Liverpool by a single point at the end of a thrilling race thanks to a run of 14 consecutive league wins to end the season.

Pep Guardiola’s men also retained the League Cup in February, the first leg of their potential domestic clean sweep, which has never before been done in England.

However, the club have spent much of the week preceding the Wembley showcase responding to reports that they could be set for a season’s ban from the Champions League over alleged breaches of financial fair play rules.

The case was referred to UEFA’s adjudicatory chamber on Thursday to decide what sanction, if any, should be imposed. City replied, saying they were “disappointed, but regrettably not surprised” by the move from European football’s governing body.

“I’m not too much concerned or worried about what people say,” City boss Guardiola previously insisted when questioned whether the investigations threaten to taint his legacy at the club.

“If we have made mistakes we will be punished -- it is what it is, on and off the pitch -- but I’m pretty sure what we have done is incredible.”

Guardiola’s side have smashed a host of records during his three-year spell in charge, despite a disappointing trophyless debut campaign in England.

However, a first-ever clean sweep of League Cup, Premier League and FA Cup would give this City side a claim to be the best England has ever produced.

Kompany could make his final City appearance at Wembley with the Belgian’s contract up in the summer and no new deal agreed as yet.

City won their fifth FA Cup in 2011, the first silverware since Sheikh Mansour’s takeover, but will be wary of complacency after slipping up against Wigan at Wembley in 2013.

In contrast to City’s trophy-laden decade, Watford have never won a major trophy.

And despite losing twice to Guardiola’s men in the league this season, Hornets boss Javi Gracia, whose side mounted an impressive comeback to beat Wolves in the semi-final, is taking heart from both games.

“I think it showed us it’s possible,” said the Spaniard. “We lost both games but I think we showed that we can beat them.

“We competed really well in both games in different moments. In the first game we lost 2-1 but we competed until the end and had chances at the end. In the second one we kept the result until the second half and then they scored from an offside position and the game changed.”

Meanwhile, Watford captain Troy Deeney said going to prison was a blessing in disguise that helped him rethink his life as he prepares now to lead the club into their second ever FA Cup final against City.

Deeney, 30, who served three months of a 10-month sentence in 2012 following a conviction for affray, has since become a folk hero at the club, helping them earn promotion to the Premier League in 2015 and guiding them to 11th this season.

He scored as Watford beat Wolverhampton Wanderers 3-2 after extra time of a memorable FA Cup semi-final to reach the final for the first time in 35 years and Deeney is eager to collect his medal from Britain’s Prince William.

“It’s one of them games when, looking back on it now, from my background to meeting royalty and stuff, it’s mental really when you think about it,” Deeney told ESPN in an interview here

“When I got to jail, it was a blessing in disguise because it made me re-evaluate and check who I am as a person.

“It opened up new avenues... such as seeing a psychologist and having to deal with my problems because I used to drink a lot as well. I used to think I was dealing with things, but I was drinking and that kind of went into a spiral effect.”

Deeney is aware of the daunting task facing Watford in their attempt to deny Premier League champions and League Cup winners City a unique domestic treble.