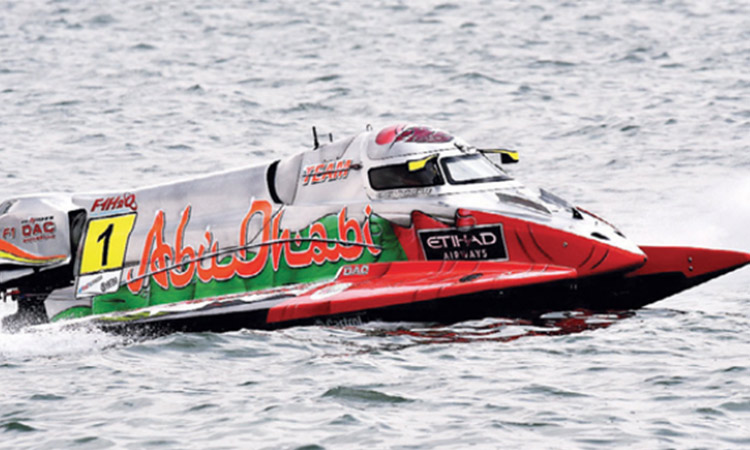 Nine teams will head for the second round of the championship in Portimao.

Reigning world champion Shaun Torrente has set his sights on another double success in Portugal this weekend as holders Team Abu Dhabi aim for a flying start to the 2019 UIM F1H2O World Championship.

After storms disrupted the opening round of the series in Dammam, Saudi Arabia, Torrente and Thani Al Qemzi are eager to launch the defence of their team title with a win in Portimao. 18 drivers representing nine teams will head for the second round of the championship to be held from May 17 to 19.

Torrente has particularly good feelings on his return to the Grand Prix of Portugal where he followed up his pole position with a race win on his debut with Team Abu Dhabi last year.

“It was a great Grand Prix for us last year,” he said. “I felt nervous as it was my first race for Team Abu Dhabi, and I was very happy to come out on top. Going back to a venue where you’ve won before makes you feel that you are good for that race course.

“I really love that venue and I’m looking forward to racing there again.”

“It was very frustrating to not get started in Saudi after all the hard work done by the team to be ready for the new season.

“We want to get the first Grand Prix in the books and start off on a good foot, and I just can’t wait to get going again in Portimao,” Torrente added.

Qemzi, third in last year’s drivers’ championship, commented: “I have a very good feeling that we will retain our team title this season. But for the time being we’re focused only on this event which will show how strong the competition is this year.”

“As for main contenders in the individual championship, I can’t look past my own team-mate. Shaun is definitely the man to beat.”

Among the Team Abu Dhabi duo’s biggest rivals will be France’s three time-world champion Philippe Chiappe who is chasing his fourth win in Portugal in partnership with son-in-law Peter Morin for CTIC F1 Shenzhen China.