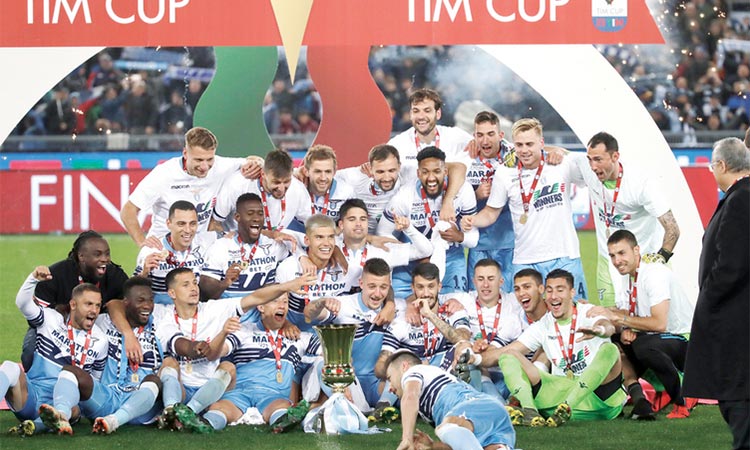 Lazio players celebrate with the trophy after beating Atlanta in the final of the Italian Cup on Wednesday. Associated Press

Milinkovic-Savic’s fine header set Lazio on their way with eight minutes left at the Stadio Olimpico, seconds after coming on as a substitute, before Correa sealed victory in the closing moments of the match.

The victory books Lazio a ticket to next season’s Europa League, much-needed for Simone Inzaghi’s side as they are eighth in Serie A, four points off the European berths with two games left to play.

“It’s a great satisfaction, we deserve it because we’ve come a long way.”

However his side’s win was marred by clashes outside the stadium between Lazio’s hardcore ‘ultra’ supporters and police before the game.

Fans threw projectiles at officers as a police car was burned near the Ponte Milvio bridge not far from the Stadio Olimpico.

According to Italian media, two policemen were injured, one in an ear by a projectile, and five fans were arrested.

However, Atlanta have other ambitions, like qualifying for the Champions League for the first time in their history.

Earlier, Atalanta beat Juventus 3-0 in the cup quarterfinals, ended the defending champion’s hopes of a fifth straight league and cup double. They then beat Fiorentina 6-4 on aggregate in the semifinals.

The first match against Fiorentina kicked off an ongoing 11-match unbeaten streak, which has lifted Atalanta up to fourth place in Serie A and the final Champions League qualifying berth. Lazio are seven points behind and its Champions League hopes ended two weeks ago with a loss to Atalanta –– its second of the season.

Gian Piero Gasperini’s side head to league champions Juve on Sunday looking to keep hold of fourth place in Serie A, which is being chased by AC Milan and Roma, both three points back.

“It’s a pity, but finals are like that,” said Gasperini. “The decisive moment of the match arrived in the second half and we lost on a corner kick.

“We now head to Sunday, because there is a place in the next Champions League to defend. We’ll overcome this disappointment, even if our run in the tournament was a great experience.”

Atalanta have a three-point advantage over AC Milan and Roma with two matches remaining. Atalanta had arrived in Rome on a 12-match unbeaten run, having not lost since the end of February, and having beaten Lazio in both of their Serie A games this season.

But they could not find a way past their solid opponents after failing to take their chances in a nervy game, with Papu Gomez denied by Thomas Strakosha in the Lazio goal within the first minute.

Seconds afterwards Savic made an almost immediate impact after coming on to replace Luis Alberto, who himself had just missed a chance for Lazio.

The Serb broke through leaving Pierluigi Gollini powerless, and Correa finished off a counter attack minutes later to end the discussion and award Inzaghi with his first major honour since winnning the competition as a Lazio player in 2009.

“Trophies aren’t just cups in a display case, for Atalanta playing for the Champions League would be really important.