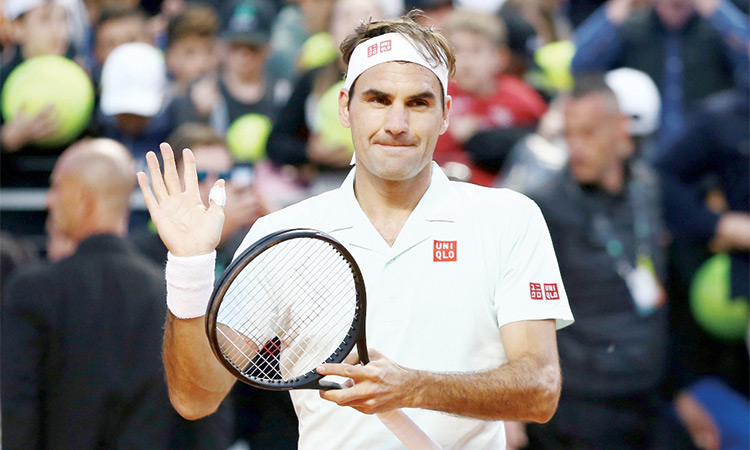 Federer, a four-time finalist in Rome, next meets either Greek eighth-seed Stefanos Tsitsipas or Italian Fabio Fognini, seeded sixth, for a place in the semi-finals.

Earlier, Australian firebrand Nick Kyrgios was disqualified from the Italian Open after an expletive-laden rant on Thursday as defending champion Rafael Nadal swept into the third round along with top seed Novak Djokovic.

Kyrgios grabbed the headlines when he suffered a spectacular meltdown on Court Three against Norwegian qualifier Casper Ruud.

The controversial 24-year-old, who had marked his presence in Rome by criticising Djokovic and Nadal in an interview on Wednesday, starting arguing with the umpire in the third set.

World number 36 Kyrgios had levelled the match at one set all but was given a game penalty early on in the third set for swearing.

His response was to kick out at a water bottle before throwing a chair onto the court, packing his bag and then storming off court, shouting I am fucking done’’

Kyrgios was automatically disqualified with Ruud winning 6-3, 6-7 (5/7), 2-1 to advance to the third round against former US Open champion Juan Martin del Potro.

Nadal and Djokovic were to be in action again versus Georgian Nikoloz Basilashvili and Philipp Kohlschreiber respectively later in the day to make up time after play was washed out on Wednesday.

Meanwhile, Japan’s Naomi Osaka won twice on Thursday to reach the Italian Open quarter-finals, retaining the world number one ranking ahead of the start of the French Open next week.

She eased into the last eight in Rome with a 6-3, 6-3 win over Mihaela Buzarnescu.

Osaka beat the 29th-ranked Romanian in 78 minutes after earlier beating Slovak Dominika Cibulkova by the same scoreline in one hour and 42 minutes in the second round, as players doubled up after the previous day was washed out.

Osaka next meets Madrid champion and sixth seed Kiki Bertens for a place in the final four.

Also, Britain’s Johanna Konta brushed aside former champion Venus Williams to reach the quarter-finals of the Italian Open on Thursday.

Konta had earlier beat another American Sloane Stephens 6-7 (3/7), 6-4, 6-1 as competitors play two games to make up for Wednesday’s rain washout.