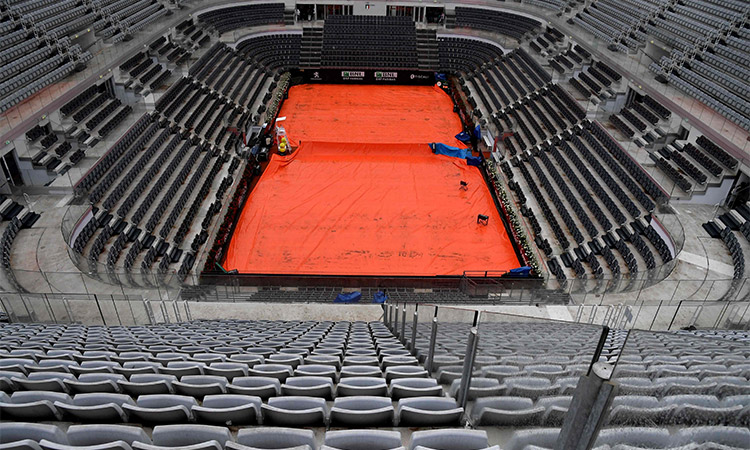 This general view shows the covers on the Central Court at Foro Italico in Rome on Wednesday. Agence France-Presse

Rome: Roger Federer was among dozens of players kept off court by rain on a chilly Wednesday at the Italian Open as organisers refused to provide refunds in case of a total washout.

The policy promises to create ill-will after officials last weekend doubled the price of Wednesday tickets after Federer’s late decision to play in Rome.

“If a session is postponed or cancelled due to weather or acts beyond our control, the Tournament Committee will attempt to accommodate the ticket holder at a subsequent session,” the website statement read.

“In the event of rain during play the committee will determine whether a session is completed. However, no refunds will be given.”

The Swiss icon last appeared at the Foro Italico in the 2016 third round, losing to Dominic Thiem.

He was due to begin on Wednesday against Portugal’s Joao Sousa.

Once he announced his decision to come to Italy after losing a Madrid quarter-final last week to Thiem, Rome organisers quickly hiked prices to the equivalent range of 96 to 212 dollars.

“We want to reward fans who had bought tickets before they knew Federer would play,” the Italian Tennis Federation explained. Besides Federer, other major names were also caught out by the situation, including men’s top need Novak Djokovic and number two Rafael Nadal. Djokovic was facing Canadian Denis Shapovalov while Nadal was to play France’s Jeremy Chardy.

Earlier on Tuesday, two-time women’s holder Elina Svitolina crashed out of the along with Germany’s Alexander Zverev. Svitolina —- who had a first round bye as fifth seed —- held a match point at 5-2 in the third set before slumping 6-4, 1-6, 7-5 to Belarus Victoria Azarenka in a 2hr 14min battle at the Foro Italico which was twice interrupted because of rain.