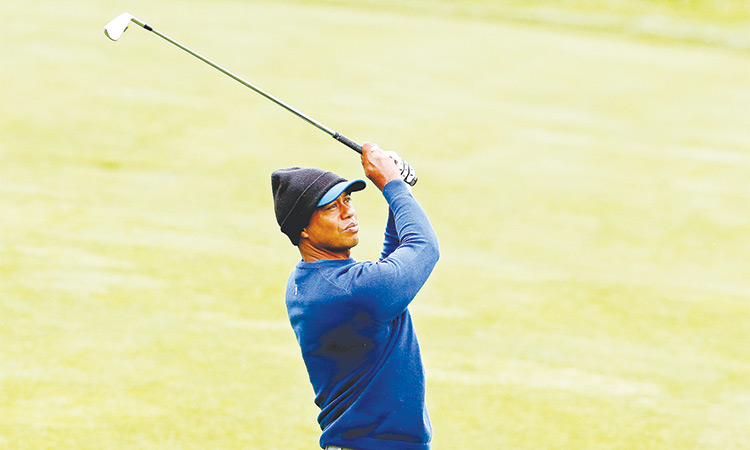 Tiger Woods plays from the fairway on the ninth hole during a practice round for the PGA Championship in Farmingdale on Tuesday. Associated Press

Bethpage: Tiger Woods launched his quest for a 16th major title, and a possible return to world number one, with a PGA Championship practice round in cold and rainy conditions on Monday.

The 43-year-old American, who snapped an 11-year major win drought by capturing last month’s Masters, toured the front nine at Bethpage Black in just under 2 1/2 hours ahead of Thursday’s start to the year’s second major tournament.

“I feel good,” Woods told Golfweek. “Got a couple more days of work to get in and I’ll be ready to go.”

Woods hopes to pull within two of the all-time record 18 majors won by Jack Nicklaus and take a fifth PGA crown, which would match the career record hauls of Nicklaus and Walter Hagen.

“To tie Walter Hagen and Jack Nicklaus with five wins would be a very special accomplishment,” Woods said. With a victory, Woods would also match the all-time career US PGA wins record of 82 by Sam Snead.

Woods, whose career had been jeopardized by years of nagging back pain before 2017 spinal fusion surgery, won the 2002 US Open at Bethpage Black and shared sixth in the 2009 US Open, but those were in warmer mid-June conditions.

This marks the first PGA Championship since 1948 to be played in May after the event was shifted this year from its traditional August spot in golf’s lineup.

Woods practiced four times last week, including an 18-hole session at the Long Island public layout last Wednesday, two days after accepting the Presidential Medal of Freedom in a White House ceremony.Woods faces a lawsuit from the parents of a staffer at his Florida restaurant who died in a drink driving accident after allegedly being overserved alcohol, TMZ reported on Monday.

Meanwhile, Woods plans to practice smarter and play less to keep his body fresh, but the 43-year-old golf star might change that strategy to reach the 2020 Tokyo Olympics.

With the PGA settling into its new May date after moving from August, it’s only the sixth time Woods has not played between major starts, admitting Tuesday he wasn’t mentally ready to return two weeks ago at Quail Hollow.

“I’m always looking for breaks,” Woods said. “I wanted to play at Quail Hollow, but to be honest with you, I wasn’t ready yet to start the grind of practicing and preparing and logging all those hours again.”