Inter inch closer to Champions berth with victory over Verona 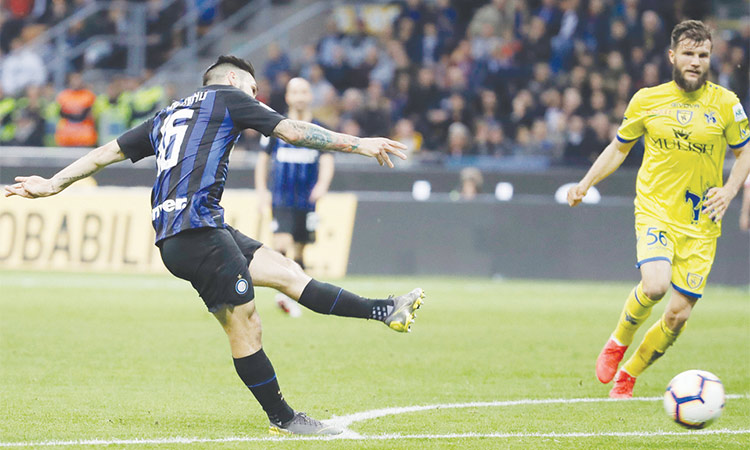 Inter Milan took a crucial step towards securing Champions League football by beating 10-man Chievo Verona 2-0 in Serie A on Monday. Inter moved back into third spot in Serie A, a point above Atalanta, which occupies the final Champions League qualifying berth.

Matteo Politano opened the scoring shortly before halftime and Ivan Perisic, who earlier hit the post, sealed the result after Chievo midfielder Nicola Rigoni was sent off for a second booking.

Last-placed Chievo had already been relegated.

Bologna all but achieved Serie A safety with a 4-1 win over 10-man Parma, which is in danger of getting sucked back into the relegation dogfight.

Bologna was helped by two own goals, including from Parma goalkeeper Luigi Sepe, who kept his side in the match early on with three sensational saves.

Parma defender Francisco Sierralta scored the other own goal late on. Parma captain Bruno Alves was sent off with his team trailing 2-0 after he was showed a second yellow card for his reaction after being booked for a foul.

Bologna moved five points above the relegation zone and two above Parma.

Meanhwile, after being heavily linked with Roma and Juventus, Antonio Conte seems destined for Inter Milan if the coach returns to Italian soccer.

Italian newspapers have reported Conte has already agreed on a three-year contract with the Nerazzurri to replace current coach Luciano Spalletti at the end of the season.

Inter chief executive Giuseppe Marotta did not deny the reports when asked about them on Monday.

“We have to bear this discussion and that’s not easy because it’s annoying,” said Marotta, who brought in Conte as coach at Juventus. “But Spalletti’s work has to be recognized.”

It hasn’t been an easy season for Inter, however: It was eliminated from all competitions early on, top signing Radja Nainggolan has performed way below expectations, and there has been trouble with forward Mauro Icardi, who was stripped of the captaincy at the beginning of the year.

Icardi, who scored 29 league goals last season and 24 in the previous one, has netted just 10 times this campaign. He hasn’t scored from open play since December and he was again roundly jeered by the Inter fans when he was substituted 11 minutes from time against Chievo.

Conte has been out of a job since June 2018 when he was fired from Chelsea, and the former Juventus and Italy coach is seen as the perfect man to rejuvenate the squad.

“I can’t understand the criticism that has come of late,” Marotta added. “We have an objective to achieve and we are aware of it, what matters is our position in the table.

“Everything else is an irritation and we have to be alert so that we can deal with these disturbances in the best of ways.”

Alessandro Florenzi might be “too small to speak” according to Cristiano Ronaldo but he had the last laugh as he set Roma on its way to a 2-0 victory on Sunday.

A row broke out between the players late in the match on Sunday after Ronaldo unsportingly didn’t give the ball back after Roma kicked it out so an injured player could get treatment.

Florenzi was fuming and Ronaldo responded by making a gesture with his hand and clearly saying “you’re too small to speak.”

Florenzi, who is 173 centimeters tall, was asked about the tiff with Ronaldo “Let’s leave what happens on the pitch there,” Florenzi said. “We’d put the ball out of play, and then he played it. Obviously he’s won the Ballon d’Or and thinks he has all the right to do what he did.” Ronaldo had earlier had a goal ruled out, hampering his chances of winning the top goalscorer award. He trails Sampdoria forward Fabio Quagliarella by five goals.