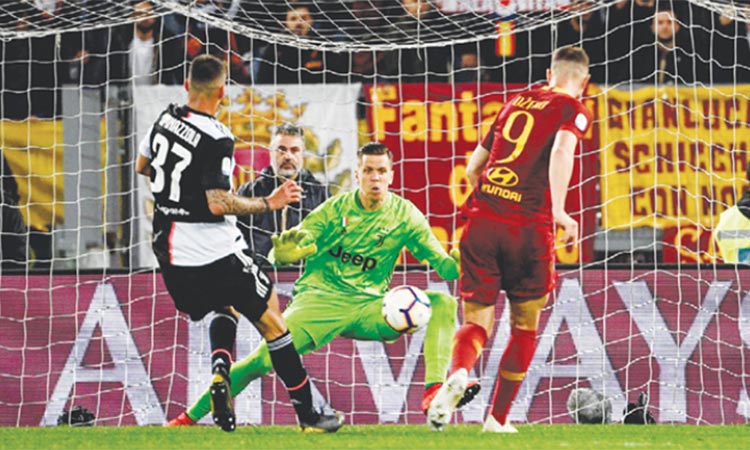 AS Roma Edin Dzeko (right) scores a goal against Juventus during their Italian League match on Sunday. Agence France-Presse

Dzeko set up Florenzi for the first after 79 minutes in the Stadio Olimpico with the Bosnian then slotting in the second two minutes into injury time as Juventus fell to just their third defeat this season.

The defeat came on the day that Juventus displayed their new strip which no longer features the club’s iconic black and white stripes in a breakaway from over a century of tradition.

Massimiliano Allegri’s side have not won a match since sealing an eighth consecutive Scudetto, being held to 1-1 draws in their last two games against Inter Milan and Torino.

Roma needed a win after their Champions League rivals Atalanta, AC Milan, Torino and Lazio all won their games this weekend.

Juventus and Napoli have already booked their berths in next season’s elite European berths with two places remaining.

AC Milan also won 1-0 against Fiorentina 1-0, and are one point behind Inter in fifth, with Roma equal on points with Milan, with two games left to play.

“A great (goalkeeper Antonio) Mirante kept us up in the first half but I am satisfied with the game,” said Roma coach Claudio Ranieri.

Mirante pulled off towering saves, denying Juan Cuadrado and Paulo Dybala. After the break Cristiano Ronaldo had the ball in the back of the net after 64 minutes but was ruled offside.

But Roma captain Florenzi, perhaps annoyed by Ronaldo who had just made fun of his size, turned things around when he picked up a Dzeko cross to break the deadlock.