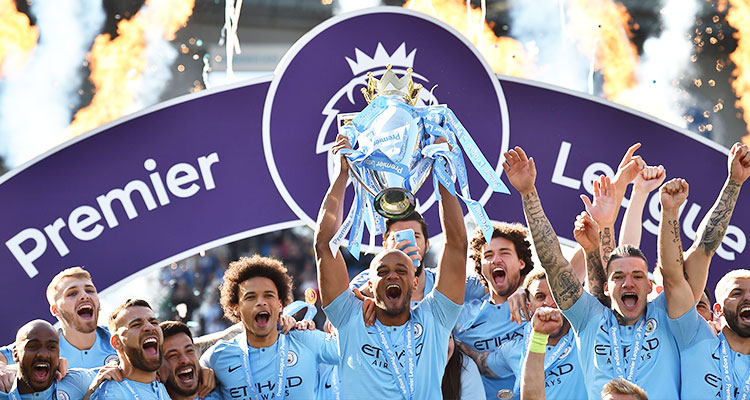 A 14th straight league win ensured Pep Guardiola's men pipped Liverpool by a solitary point as the Reds' long wait to win the league continued despite a 2-0 victory over Wolves at Anfield that saw them post the third highest points tally in Premier League history.

City remain on course to complete the first ever domestic treble in English football in the FA Cup final next weekend as goals from Sergio Aguero, Aymeric Laporte, Riyad Mahrez and Ilkay Gundogan saw the visitors recover from Glenn Murray's shock opener.

For 83 seconds Liverpool fans were able to dream, but City showed why they are champions and have racked up a remarkable 98 points, just two shy of their record century of points last season. 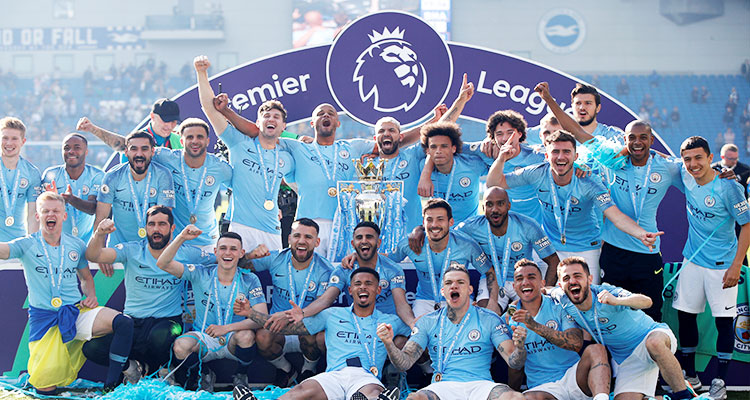 Manchester City players pose with the trophy as they celebrate winning the Premier League.

Liverpool applied as much pressure as they could with their own nine-game winning run to end the season and went in front early against Wolves to raise the tension inside the Amex Stadium.

City had not conceded in their previous four games, but Brighton were playing on their nerves as they sought revenge for defeat in their FA Cup semi-final last month.

Ali Jahanbakhsh flashed a shot just wide of Ederson's right-hand post before the moment that was celebrated as wildly 270 miles north at Anfield as it was on the south coast.

Pascal Gross's dangerous in-swinging corner was powered home by veteran striker Murray at the near post on 27 minutes.

This was the first time City had failed to score first in a league game since early December and the first time they had trailed at all in the 14-game winning run that has carried them to the title.

However, Brighton's lead and Liverpool's hope lasted just over a minute. 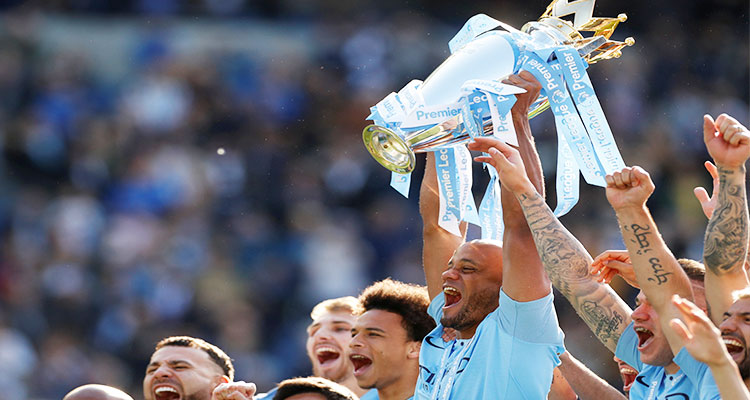 Aguero scored the sensational last-gasp goal that ended City's own 44-year wait for the title in 2011/12 and his goals have been a constant of their now four Premier League triumphs in eight seasons.

David Silva's wonderful flick freed the Argentine in behind the Brighton defence and Aguero made no mistake with a powerful low finish.

The brief shock of going behind sparked City into life as Mathew Ryan was then forced into saves at his near post from Bernardo Silva and Mahrez.

However, Brighton were undone from a simple set-piece when Mahrez's corner found Laporte completely unmarked to head City in front seven minutes before half-time.

The champions still had nervy moments to see through as Ederson only just scrambled Lewis Dunk's dipping free-kick over the bar with the last action of the first half. 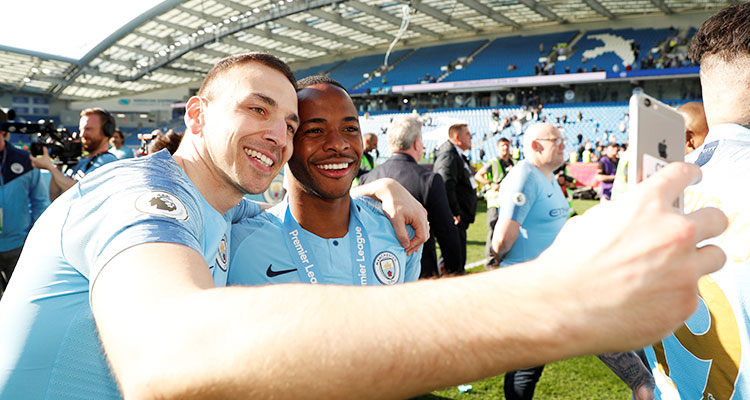 Manchester City's Raheem Sterling poses for a selfie as he celebrates winning the Premier League.

And the Brazilian goalkeeper was lucky not to concede a free-kick yards from the City goal line when he collected a back pass from Laporte.

Yet, 27 minutes from time they had the breathing space they desired in a moment of magic and redemption for Mahrez.

The Algerian has failed to make a big impact in his first season since joining for a club record £60 million from Leicester.

Until now his most noteworthy moment was a late missed penalty in a 0-0 draw at Anfield in October that could easily have cost City the title.

Instead, he scored the goal to ensure Liverpool were denied at the end of a remarkable title tussle by cutting inside Dunk before firing into the top corner on his weaker right foot.

Nine minutes later Gundogan added the icing on the champions' cake with a glorious free-kick from 25 yards.