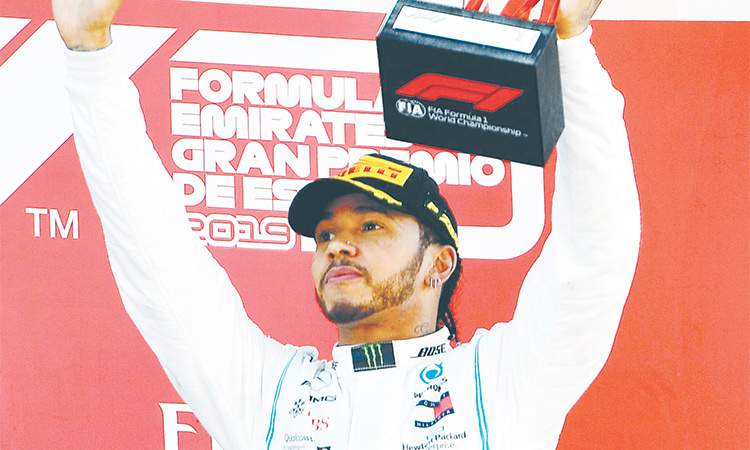 Mercedes driver Lewis Hamilton celebrates on the podium after winning the Spanish Formula One race on Sunday. Agence France-Presse

Lewis Hamilton beat Valtteri Bottas in the Spanish Grand Prix on Sunday to replace his team-mate as world championship leader as Mercedes’ extended their record start to the season with a fifth 1-2 finish.

The defending five-time world champion seized the initiative at the start in Barcelona and led from lights to flag with a consummate demonstration of his speed and race-craft at the Circuit de Catalunya.

Responding to being outpaced by Bottas in qualifying, Hamilton came home 4.074 seconds ahead of the Finn who was second ahead of Max Verstappen of Red Bull, four-time champion Sebastian Vettel and his Ferrari team-mate Charles Leclerc.

Pierre Gasly was a solid sixth in the second Red Bull ahead of Kevin Magnussen of Haas, home hero Carlos Sainz of McLaren, Daniil Kvyat of Toro Rosso and Romain Grosjean in the second Haas.

It was the 16th time that Hamilton won a Grand Prix after leading every lap of the race.

Hamilton’s triumph hoisted him back to the top of the standings with 112 points, including one for fastest lap, ahead of Bottas on 105.

“I have to put it down to this incredible team,” said Hamilton. “This is history in the making to have five 1-2’s. I am very proud of that!

“It’s definitely been a bit of a hard first four races. Naturally we have a great car, but we don’t always get along. I’m grateful in the race that we managed to settle our differences.”

Verstappen said: “It was a hectic first corner - I just backed out of it and it gave me a good position. From there, the Mercedes were just too quick today.”

Hamilton made a near-perfect start to draw level with pole-man Bottas and seize the initiative as they began the long run to Turn One.

This left Bottas to respond, but he had to defend against an attack on his left from Vettel down the third-longest straight on the F1 calendar. Hamilton’s surge gave him the inside line while Vettel locked up as he attempted to pass Bottas and swerved left to avoid a collision.

Bottas had to move quickly too as Leclerc cut in from the right, the Ferraris narrowly missing each other as the order settled in Turn Two. Verstappen, taking his chance to pass the flat-spotted Vettel, then swept up to third.

Almost invisibly, Hamilton then began to pull clear. From 1.7 seconds after three, his lead was 2.2 in six and three seconds by lap 10. Bottas could not match his thrust through traffic and by lap 20, when Vettel pitted, the champion was clear by seven seconds.

In that time, on lap 12, Ferrari told Vettel to let Lerclerc pass him for fourth, the Monegasque moving up to third when Verstappen pitted on lap 23. By the time Hamilton had been in and out after lap 27, the order resumed: Hamilton ahead of Bottas by eight seconds with Verstappen, Leclerc and Vettel chasing. Notably, both Ferrari stops took 4.4 seconds while the Mercedes men were stationary for 2.8 and 2.6 respectively. Clearly keen to quell Bottas’ bid for another win, Hamilton was in steely mood. “Keep me updated, man,” he asked his engineer Pete Bonnington.

With 20 laps to go, Bottas pitted for softs as Lance Stroll collided with British rookie Lando Norris, prompting a Safety Car intervention that gifted Hamilton, with a blistered right rear, and Leclerc ‘cheap’ stops for softs to reach the finish.