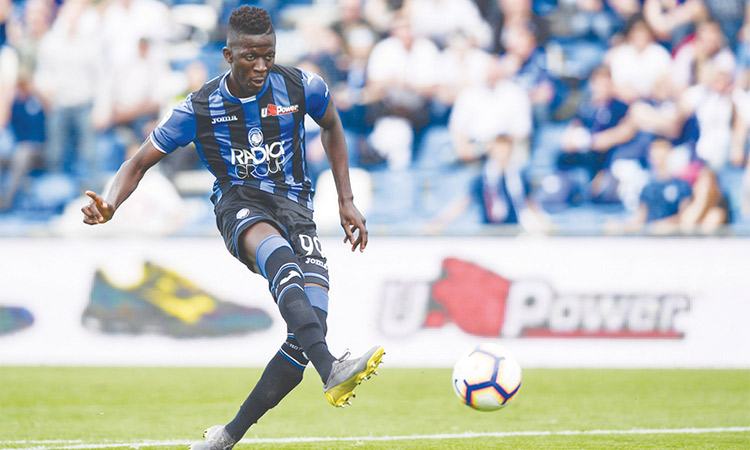 Unheralded Atalanta moved third in Serie A on Saturday with a 2-1 win over Genoa edging the Bergamo side closer to a first-ever Champions League qualification with two games left this season.

But AC Milan responded with Hakan Calhanoglu heading in the only goal against Fiorentina to boost Gennaro Gattuso’s team’s hopes of a return to elite European football for the first time since 2013-2014.

AC Milan are fifth, one point behind Inter, with Roma a further three points adrift in sixth before they host champions Juventus.

“Today’s win was really important, as the closer we get to the finish line, the more decisive each point becomes,” said Atalanta coach Gian Piero Gasperini.

“Mathematically, we have only a few points left to go, but it also puts us in a better state of mind going into the Coppa Italia final.

“The team has been extraordinary in terms of mentality.”

Juventus and Napoli have already qualified for next season’s Champions League, but behind them the scramble is frenetic in the chase for the two remaining berths.

Castagne and Duvan Zapata both had goals ruled out for offside in the first 20 minutes of the game at Sassuolo’s Mapei Stadium, with Atalanta’s home ground undergoing work.

But 20-year-old Gambian Barrow broke through immediately after being substituted on at the break for his first goal this season, with Belgian Castagne adding a second on 53 minutes, finishing off Berat Djimsiti’s low cross.

Goran Pandev pulled a goal back for Genoa one minute from time, but the fightback came too late as Atalanta extended their unbeaten run to 11 matches. Atalanta’s next two league games are against Juventus in Turin and back at the Mapei Stadium against Sassuolo on May 26. The victory is a boost for Gasperini’s side who head to Rome on Wednesday to play the Coppa Italia final against Lazio.

“The Champions League is a dream,” said Castagne.

“We realised we could fight for fourth place when we completed the comeback against Roma, then beat Juventus in the Coppa Italia.

In Florence, French midfielder Tiemoue Bakayoko started for Milan despite his touchline bust-up with Gattuso during last Monday’s win over Bologna as the team push for a top-four finish.

“There are six points left, we have to do it,” insisted Gattuso, with their final games against relegated Frosinone and midtable SPAL.

“From January until 20 days ago we were in the Champions League, we regret those lost points, but we certainly can’t stop believing in it now.”

Meanwhile, Serie A champions Juventus on Sunday unveiled their new home kit for the 2019-20 season, which for the first time in over a century removes the iconic black-and-white stripes traditionally worn by players.

The club was founded in 1897, but players have worn black and white stripes of various types since 1903.

Next season Cristiano Ronaldo and his teammates will wear a half-and-half jersey with white on the right and black on the left.

The team will debut the new jersey against Roma in Serie A on Sunday in the Stadio Olimpico.

“The daring new design evokes the past, whilst igniting the future of the club through the evolution of the iconic black and white stripes,” the team said.

“An unexpected flash of pink sits at the heart of the design and honours the first colour the club ever played in.”

Juventus are the record Serie A winners with 35 titles, including the last eight in a row.