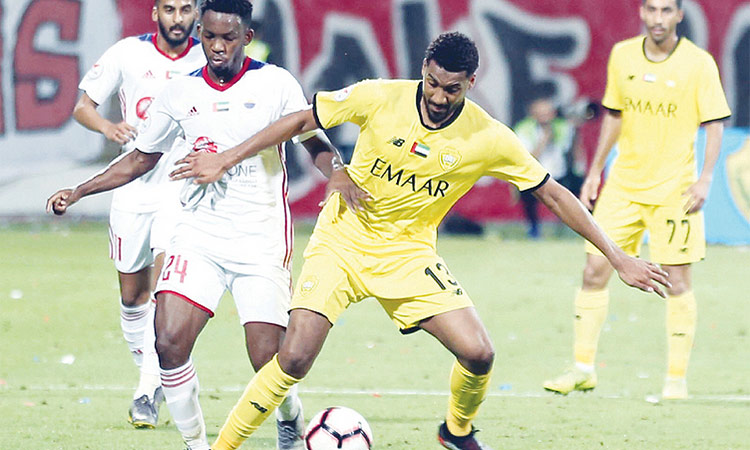 Players of Al Wasl and Sharjah vie for the ball during their Arabian Gulf League match at the Zabeel Stadium on Saturday.

Sharjah’s poor run of results continued as they fell to a 3-2 defeat against Al Wasl in a thrilling encounter at Zabeel Stadium in matchweek 24 of the Arabian Gulf League on Saturday night.

Al Wasl controlled the possession in the early stages of the game but failed to pose a real threat on Sharjah’s goal. The King thought they opened the scoring on the 10-minute mark but Igor Coronado’s effort was ruled out for a foul against the keeper, after consulting the VAR.

It was Al Wasl, however, who drew first blood as they broke the deadlock six minutes before the break. Fabio de Lima’s effort from outside the box deflected off Al Nasr defender before nestling into the back of the hosts’ keeper net.

The King leveled the scoreline 20 minutes into the second half. After an impressive set of passes inside the box, the ball fell to Ali Aldhanhani who sent a powerful effort into the bottom right corner of the net.

Al Wasl needed only seven minutes to regain their lead as Ali Saleh found the back of the net in the 73rd minute. Caio Correa’s pass found Saleh inside the box and the latter sent a powerful right-footed effort from a tight angle to put his side 2-1 up.

Sharjah refused to give up and they netted the equalizer six minutes from time. The King were awarded a penalty kick after keeper Adel Alhosani fouled Faris Khalil inside the box. Coronado converted from the spot to make it 2-2.

As the guests went searching for the winner in the dying minutes of the game, they were dealt a blow as Shaeehn Abdelrahman was sent off for a second booking two minutes from time.

Deep into injury time, Fabio de Lima netted his second goal of the night to hand his side the three points. The Brazilian forward sent a strike from outside the box that left Alhosani helpless.

This marked Sharjah’s first defeat of the season. The King top the table on 53 points, only three points above Shabab Al Ahli with two matchweeks to go. Meanwhile, Al Wasl raised their tally to 33 points in seventh place.

After a slow start to the game at Fujairah Stadium, Al Ain managed to break the deadlock midway through the first half. Following an impressive teamwork and a number of excellent passes, Amer Abdulrahman tapped the ball home to give the guests a 1-0 lead.

Deep into injury time, Caio added a second goal to seal the three points for the Boss. The Brazilian dribbled past the Dibba keeper Abdulla Sultan before tapping into the empty net.

At Al Nayhyan Stadium, Al Wahda earned a valuable 3-1 win over Ajman, thanks to Sebastián Tagliabué’s hattrick. The Argentine forward opened the scoring in the 54th minute after converting Khalil Alhammadi’s cross into the back of the net.

The 34-year-old doubled his side’s lead in the 76th minute with a powerful effort from inside the box, before netting his third of the night with six minutes to go. The Oranges reduced the deficit in the 87th minute through Mame Thiam, but it was too little too late as Al Wahda collected the three points.

Al Ain and Al Wahda are now tied on 43 points, in fourth and fifth place, respectively. They are one point behind third-placed Al Jazira.

Meanwhile, Ajman are eighth on 31 points, while Dibba are edging closer to relegation as they remain at the bottom of the standings with 13 points.