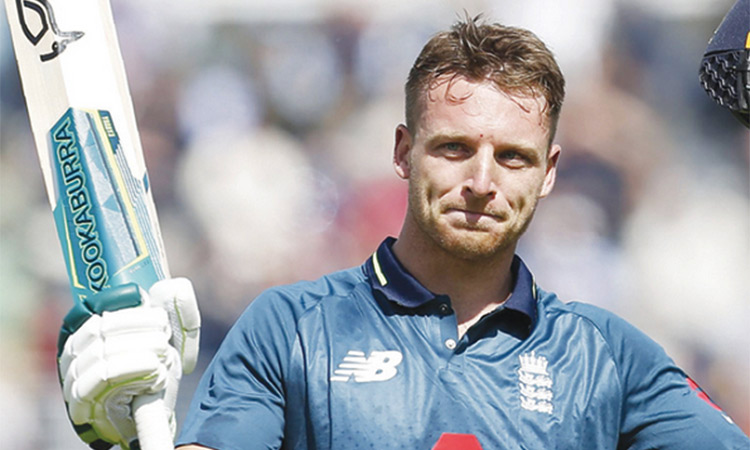 England’s Jos Buttler after his innings of 110 not out against Pakistan during their second ODI in Southampton on Saturday. Agence France-Presse

Pakistan, who were set a challenging target of 374, fell short, giving England a 1-0 lead in the 5-match ODI series, with the first match ending without a result, abandoned due to rain.

In reply to England’s 373 for 3, Pakistan’s opening pair of Imam-ul-Haq and Fakhar Zaman gave their team a brisk start, scoring at over 6.5 runs an over, with Zaman the more adventurous of the two. Pakistan lost their first wicket at the score of 92 in the 15th over, when Moeen Ali caught Haq off his own bowling. Haq made 35 (44). Babar Azam, who came in next gave Zaman good support and the pair were going along at a good clip. Zaman raced to his century and went on to score 138 off only 106 balls with the help of 12 fours and 4 sixes. However, just as it looked that the pair would comfortably take Pakistan to a win, Zaman slashed out to a ball from Chris Woakes that was declared wide. However, what proved to be a very good review, showed that the batsman had bottom edged the ball to the keeper and was declared out. The second wicket that fell at 227 was quickly followed by Azam who Adil Rashid had him caught off his own bowling for 51 (52).

Asif Ali, who had come in at the fall of Zaman’s wicket, showed aggression in his 36-ball 51 (2x4, 4x6). However, his wicket -- the fifth -- fell when David Willey had him caught by Ben Stokes when the team’s score was 323 in the 46th over. Haris Sohail’s was the fourth wicket to fall, caught behind off Liam Plunkett’s bowling after the batsman had hit 14 off 18 balls and the team’s score was 274. Imad Wasim’s (8) was the sixth to fall, in the 48th over, caught behind off a Willey delivery at the team’s score of 345.

Buttler’s 110 not out featured nine sixes, including a straight drive off Hasan Ali that took him to three figures.

Together with England captain Eoin Morgan (71 not out) he shared an unbroken partnership of 162.

Saturday’s total was the 35th time since their miserable first-round exit at the 2015 World Cup that England, now top of the ODI rankings, had posted a total in excess of 300 -- a feat they had achieved only 34 times in total prior to that tournament.

A Pakistan attack missing the ill Mohammad Amir took a pounding, with Hasan conceding 81 runs from his maximum 10 overs and Afridi 80.

Earlier, Jason Roy (87) and Jonny Bairstow (51) laid a platform for the innings with an opening stand of 115 after Morgan won the toss.

Roy, fit following back trouble that kept him out of Wednesday’s washed out opener of a five-match series at his Oval home ground, hit medium-pacer Faheem Ashraf for two huge sixes -- a drive over long-on followed by an extravagant uppercut over extra-cover. But the return of left-arm quick Afridi for a second spell saw Pakistan make the breakthrough.

Bairstow pulled him for a boundary to complete a 44-ball fifty. But the next ball saw Bairstow fail to pull down and a leaping Fakhar Zaman at deep backward square leg held a good catch at the second attempt.

Following a brief rain break, Roy fell in sight of what would have been his eighth ODI hundred when he miscued a pull off Hasan to mid-on.

Test captain Joe Root made 40 before he holed out, his exit paving the way for Buttler’s blistering innings.