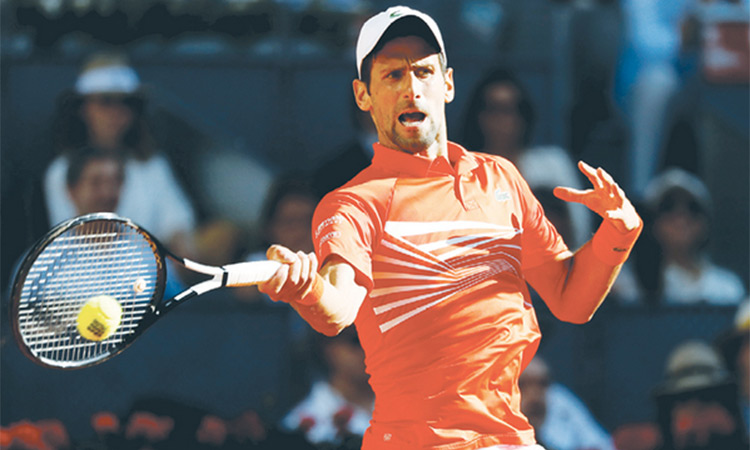 Novak Djokovic enhanced his credentials as the greatest threat to Rafael Nadal winning a 12th French Open title next month after he beat Dominic Thiem on Saturday to reach the Madrid Open final.

If Nadal overcomes the talented Stefanos Tsitsipas, it will be the Spaniard and Djokovic in Sunday’s final, in what could prove a dress rehearsal for the title match at Roland Garros too.

World number one Djokovic’s 7-6 (7/2), 7-6 (7/4) win over Thiem was far from comfortable, the Madrid crowd treated to two exhilarating sets of baseline tennis, but the Serb found his best in both tie-breaks.

In those pressure moments, Thiem, who saved two match points in beating Roger Federer in the quarter-finals, was unable to respond, even if he ran the top seed close enough to suggest he will be a serious contender again in Paris, where he was runner-up to Nadal last year.

Since taking a month off after winning the Australian Open, Djokovic has stuttered, enduring early exits in Indian Wells, Miami and then Monte Carlo.

But Thiem met the 31-year-old close to his best, delivering a timely reminder of why he has won the last three Grand Slam titles and will hold all four concurrently by winning his 16th at the French Open.

Djokovic conceded an early break when a short forehand hit the tape but struck back for 3-3, matching a Thiem drop-shot in kind before his opponent patted wide.

Thiem had a break point at 4-4 but it was Djokovic who stormed clear in the tie-break, winning the point of the match with, perhaps, the shot of the tournament.

Meanwhile, Federer will play in next week’s Italian Open as he warms up for his return to Roland Garros for the first time in four years, the 20-time Grand Slam winner announced on Saturday.

Federer, playing his first clay court event in three years, lost in three sets to Thiem in the Madrid Open quarter-finals on Friday.

“Hello everybody. Just finished speaking to the team and happy to say I’m coming back to Rome to play in Italy,” the 37-year-old said in an Instagram video on Saturday.

Federer will have a first-round bye as the number three seed in Rome, where he will begin his tournament against either Frances Tiafoe or Joao Sousa.

The Swiss has never won on the clay in Rome’s Foro Italico having finished runner-up four times.