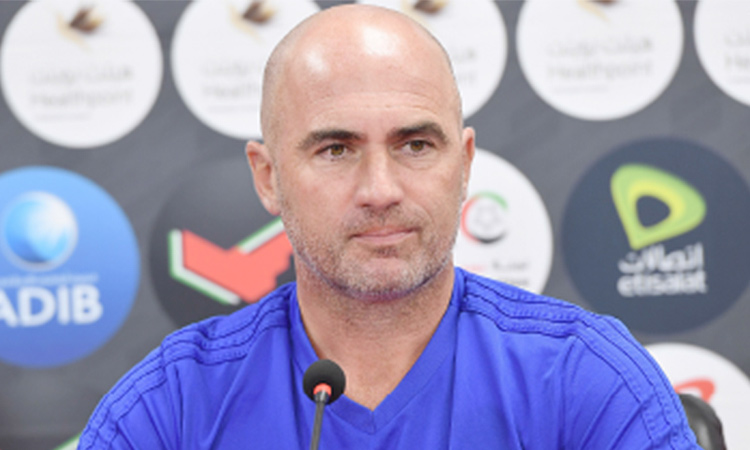 Al Jazira coach Damien Hertog attends a press conference ahead of their AGL match against Emirates.

Al Jazira head coach Damien Hertog is optimistic his team will produce a much better performance when they face Emirates Club in the Arabian Gulf League.

The Pride of Abu Dhabi make the long trip to Ras Al Khaimah for Friday’s clash as they look to register their first triumph in three matches and put their AFC Champions League qualification hopes back on track.

After describing their display as unacceptable in last week’s defeat to Al Wahda, Hertog expects Al Jazira to play their best football against Emirates.

“Last week, we committed mistakes against Al Wahda and I said before that shouldn’t be the level of football we should play at,” said Hertog during the pre-match press conference. “We have to put on a much improved performance this time because winning gives everyone confidence and belief and that will help us for the remainder of the season.

“We know how important this game is for us. We have lost twice and drawn once in our last three matches and if we want to reach the AFC Champions League, then we have to start winning. Our target is to claim all three points and we don’t want nothing less than that.”

Al Jazira will be without long-term absentees Ahmed Rabia, Mohamed Jamal as well as Fares Juma through injury while Ali Mabkhout misses out due to suspension.

While Hertog is fully aware of the threat posed by an Emirates side, who is three points clear of the relegation zone, he wants his team to keep a clean sheet.

“Football is a team game and that is defending and attacking as one,” said Hertog. “I hope we don’t concede any goals because it’s been a long time since we achieved that.”

For Sebastian Siani, he insists all the players are determined to showcase their quality again and help Al Jazira reach next season’s AFC Champions League.

“We haven’t won in three games but we are eager to end that bad run of results,” said the Cameroon midfielder. “It will not be an easy game but we will give our best to win the match and help Al Jazira reach the AFC Champions League.”