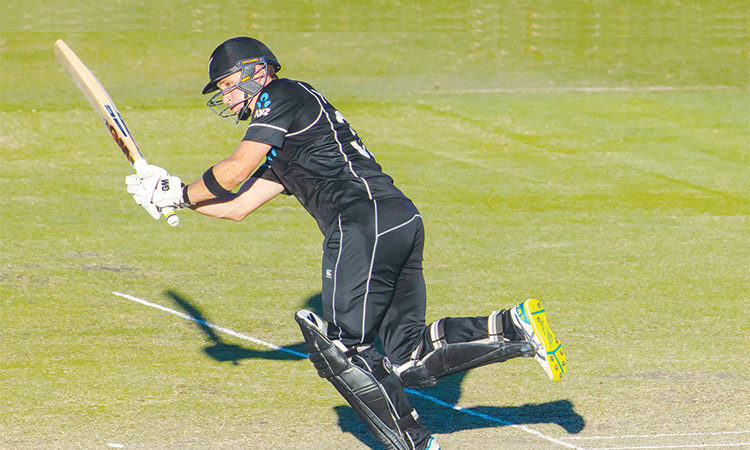 New Zealand’s Will Young plays a shot against Australia during their warm-up match in Brisbane on Wednesday. Agence France-Presse

Australia: Will Young stroked a masterful 130 to steer an under-strength New Zealand to a seven-wicket win over Australia in a World Cup practice match on Wednesday, outshining a classy unbeaten 89 from Steve Smith.

The visitors chased down their 278 target with 10 balls to spare, inflicting the first one-day defeat on Australia in 10 games, although this was not counted as a full international.

Young, who is uncapped and not part of New Zealand’s World Cup squad, was eventually run out after smacking 11 fours and two sixes in his 132-ball knock.

George Worker (56) and Tom Latham (69 not out) were also among the runs as New Zealand, missing Kane Williamson, Martin Guptill and Trent Boult, made 283 for three in reply to Australia’s 277 for six.

Australian pace spearhead Mitchell Starc made his long-awaited return from injury and was the pick of a lacklustre bowling attack, taking 2-14 off five overs with trademark yorkers before being withdrawn from the action. It was his first match back since tearing a muscle three months ago.

Earlier, former skipper Smith was the star attraction with his 89, including four big sixes, in only his second game in Australian colours since his one-year ban for ball-tampering expired.

He came to the crease when Shaun Marsh was out for 28 and was in fine touch in a major boost for Australia ahead of their World Cup defence in England.

Usman Khawaja and Glenn Maxwell were also in form, scoring 56 and 52 respectively.

But David Warner, who made 39 on his return from the “Sandpapergate” scandal in the first of the three unofficial matches in Brisbane on Monday, did not fare so well.