Hamilton favourite for Spain in big test for Ferrari - GulfToday 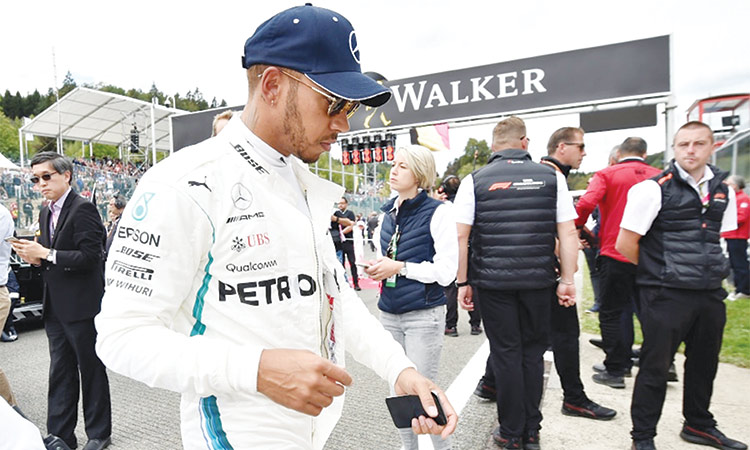 If Lewis Hamilton wins on Sunday, it will be his fourth Spanish Grand Prix victory and third in a row.

Lewis Hamilton is favourite to win the Spanish Grand Prix for a fourth time, and third in a row, on Sunday and retake the Formula One world championship lead from Mercedes team-mate Valtteri Bottas.

Needless to say, Ferrari have another script in mind for a race seen as something of a litmus test for their title prospects.

They return reeling from four successive Mercedes one-two finishes, an unprecedented start to the season by any team, and hoping an engine upgrade — brought forward by two races — will swing things their way.

If Mercedes are again quicker at such a benchmark circuit, where the champions have won four times in the last five years, the writing will be on the wall for Ferrari. They need to step up a gear and start turning things around.

Both teams have been talking up the other’s chances.

“The last four races, on average, we were not quite there so I think we are not the favourites going to Barcelona,” said Vettel, winner with Red Bull in 2011, after finishing third in Azerbaijan.

Team principal Mattia Binotto agreed: “Obviously Mercedes are very strong at the moment. I’m pretty sure they will be very strong as well in Barcelona.

“Many teams will bring aero package or car developments, so that will be again a different balance compared to what we’ve seen so far in the season,” he added.

Mercedes principal Toto Wolff dismissed Vettel’s portrayal of Ferrari as underdogs for the first race of the European season.

“The results seem to paint a relatively clear picture, but the truth is that they’re too flattering. The performance has fluctuated in the first four races,” said the Austrian.

“Our opponents were blisteringly quick in winter testing, so the Spanish Grand Prix will be anything but easy.”

Bottas leads five times world champion Hamilton by a single point, with both men on two wins, by virtue of the Finn’s fastest lap in the Australian season opener.

British bookmakers William Hill have Hamilton as race favourite at 6-4, with Bottas on 9-4 and Vettel and Leclerc priced at 9-2.

Barcelona has also been a happy hunting ground for Red Bull, with Max Verstappen becoming the sport’s youngest winner there in 2016.

“It is always a special one for me,” said the 21-year-old of a track whose future remains uncertain, with talk of Verstappen’s home Dutch circuit Zandvoort taking the slot next year.

“The temperatures will be a bit different (to testing in March) and everyone is bringing new parts to their cars, so it will be interesting to see how competitive we can be.”

Former Red Bull team-mate Daniel Ricciardo, now at Renault, has a three-place grid drop as punishment for a bizarre collision with Toro Rosso’s Daniil Kvyat in Baku. A Brazilian-Austrian flag will be displayed on the podium in tribute to the late triple champion Ayrton Senna and Roland Ratzenberger who died at Imola in May 25 years ago. Sunday’s race is the first since the anniversary.

Ferrari CEO Louis Camilleri insisted on Tuesday that the company’s Formula One team remained a “credible contender” despite a difficult start to the season. Ferrari dominated winter testing in Barcelona in February but have been outraced by great rivals Mercedes in the first four Grands Prix of the season.

“The first races clearly did not meet our ambitions, but we remain confident that we have all the necessary assets to be a credible contender for the championship,” Camilleri said at the unveiling of the luxury car manufacturer’s better-than-expected quarterly results.

“We’ve proven that we have a fast car, and we are actively focused in improving its overall balance and performance,” Camilleri said before praising the drivers, Vettel and Leclerc, and the race staff.

“We have the privilege to have two great drivers and a great team. We have a united, determined, serene and talented team both on the track and in Maranello, who will give their all to finally fulfil their ambitions.”

Vettel is the best non-Mercedes driver in the individual standings with 52 points, but trails far behind Valtteri Bottas on 87 and champion Lewis Hamilton on 86.