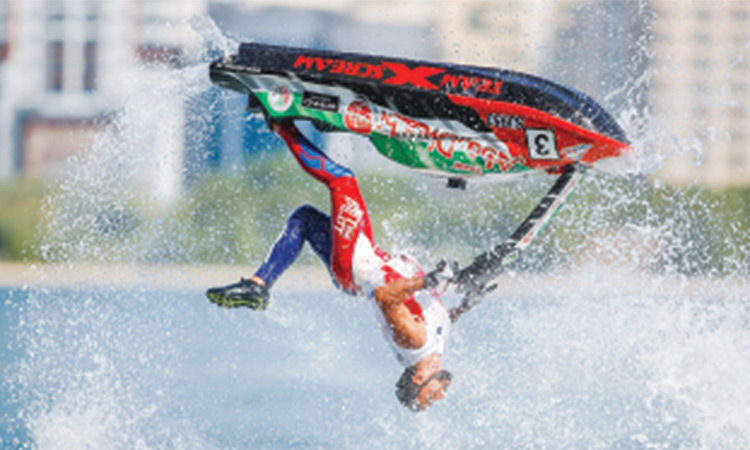 Rashed Al Mulla has been working on some breathtaking new tricks as he looks to retain his world freestyle title in the UIM-ABP Aquabike World Championship.

Team Abu Dhabi’s Rashed Al Mulla will be looking to extend his remarkable unbeaten run to a seventh Grand Prix when the 2019 UIM-ABP Aquabike World Championship gets under way in Portugal next weekend.

The reigning world freestyle champion begins the defence of his title in the season opening three-day Grand Prix event getting under way in Portimao on Friday.

Dominating the Freestyle category last season, Mulla clinched his first world title with a brilliant display in the final round on Khalid Lagoon to complete his sixth Grand Prix win in a row.

Since then the Emirati has been working tirelessly to improve some of his trademark tricks, including barrel-rolls, back-flips, reverse 360s, and combinations, and to develop new ones.

“I’ve been working on my backflip, the barrel role and on a double back flip. I’ve been practicing every day and also working hard in the gym. If I don’t have any problems with the ski I’m 100 per cent confident that I can win the world title again.”

Also representing Team Abu Dhabi in the Grand Prix of Portugal will be Rashid Al Tayer who lines up again in the Runabout GP1 championship and Salman Al Awadhi who contests the Ski Division GP1.

Sponsored by Etihad Airways, Team Abu Dhabi runs under the umbrella of Abu Dhabi International Marine Sports Club which has its sights on multiple world titles this season.

A week after the aquabike grand prix, reigning UIM F1H2O world team champions Shaun Torrente and Thani Al Qemzi begin the defence of their title in Portugal following the weather affected opening round in Saudi Arabia.

“After the success in Rouen we also hope the secure the world F2 endurance title in Poland in July,” said Salem Al Remeithi, general manager of ADIMSC.

“With his talent and commitment in aquabikes, we feel Rashed Al Mulla has everything he needs to be world champion again.”

Team Abu Dhabi is supported by the Abu Dhabi Sports Council and runs under the patronage of Sheikh Dr Sultan Bin Khalifa Al Nahyan, advisor to the Head of State and chairman of the board of directors of the Abu Dhabi ADIMSC.

Meanwhile, Jet Ski Marathon champion Amer Hawair is seeking a sponsorship boost to propel him into the international arena.

Last month he celebrated victory again in the UAE Jet Ski Marathon Championship at Abu Dhabi International Marine Sports Club after clocking up 26 laps in the two-hour test of endurance.

“I’ve been racing for two years and was jet skiing  for fun for six years before that,” said Hawair who lives in Sharjah and works as a fireman with Dubai Civil Defense.

“I now want to race in the UIM Aquabike World  hampionship in Italy, but at the moment Idon’t have any sponsorship, so if I go I may need to rent an aquabike there.” 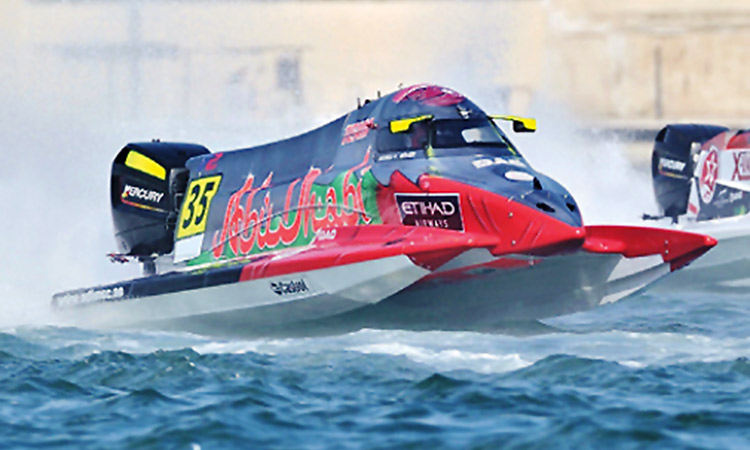