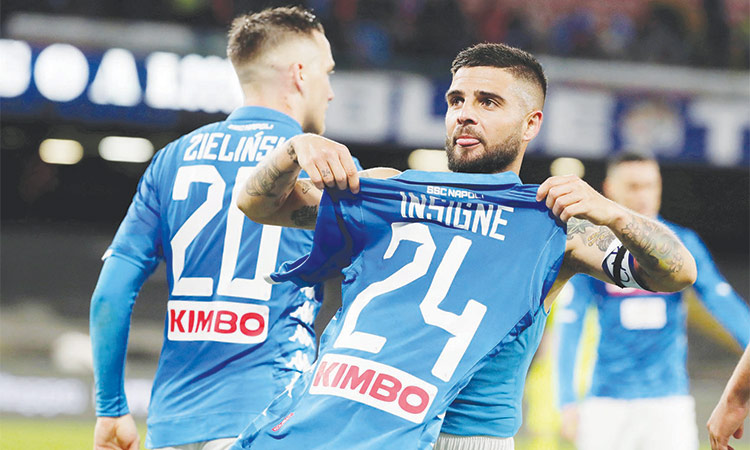 Lorenzo Insigne stepped up to slot in a 98th-minute penalty as Napoli came from behind to beat Cagliari 2-1 on Sunday to guarantee they finish second in the Italian league this season behind Juventus.

Carlo Ancelotti’s side have a 10-point lead on third-placed Inter Milan with three games left.

But they are a massive 16 points behind Juventus who had already won an eighth consecutive Serie A title with five games to spare.

“Keeping up with Juventus was honestly difficult,” said Ancelotti.

“Of course we lost the strong motivation because the gap was great, but second place satisfies us and the team will certainly be reinforced for next season.”

After a drab first half in Naples the hosts fell behind after Leonardo Pavoletti fired the Sardinians ahead after 63 minutes.

But Dries Mertens headed Napoli back into the game with just five minutes to go and in a dramatic finale the hosts were awarded a late penalty after consultation with VAR when Artur Ionita handled a Faouzi Ghoulam cross, and was sent off.

Insigne stepped up with the clock ticking to score and ensure that Napoli will finish runners-up for the second consecutive year.

Juventus and Napoli are already assured of Champions League football next season but the battle for the final two berths remains tight with six teams in the running.

Roma missed the chance to close the gap after a 1-1 draw at Genoa and are now three points behind Atalanta in fifth.

Torino are two points behind Roma in sixth after a 1-1 draw against Juventus on Friday.

At the bottom of the table, Frosinone join Chievo in Serie B next season after a 2-2 draw at Sassuolo.

FIVE TALKING POINTS FROM THE LEAGUE WEEKEND: Genoa’s 1-1 draw with AS Roma ended in confusion over who should have taken the penalty they missed in stoppage time, Sampdoria coach Marco Giampaolo said he was tired of mid-table anonymity and there was the usual VAR row in Serie A at the weekend.

GENOA PENALTY CONFUSION:  Genoa substitute Antonio Sanabria’s missed penalty in the 1-1 draw against Roma led to confusion over whether the Paraguayan should have taken it in the first place — and not even coach Cesare Prandelli was sure of the answer.

Sanabria, who came on in the 83rd minute, started several games in February and March and has been relegated to the substitutes bench since.

Criscito appealed for fans to calm down after a row blew up on social media.

The draw left Genoa flirting with relegation as they are four points clear of the danger zone with three matches to go.

GIAMPAOLO ISSUES SAMPDORIA ULTIMATUM:  Sampdoria coach Marco Giampaolo, tired of seeing his team finish in mid-table, has threatened to walk away if the club fail to strengthen the squad.

“I’m not prepared to go through another season of living anonymously,” said Giampaolo, who is about to complete his third season in charge.

“In these three seasons, we have improved but now we need to take a step upwards,” he said after the 3-3 draw with Parma which left his side ninth in the standings.

ANOTHER VAR ROW: Napoli’s dramatic 2-1 win over Cagliari, thanks to a penalty converted by Lorenzo Insigne in the eighth minute of stoppage time, prompted the inevitable row over a VAR decision.

Faouzi Ghoulam’s cross hit Fabrizio Cacciatore’s elbow at close range although it appeared the Cagliari defender was just outside the penalty.

However, after a lengthy VAR review, referee Daniele Chiffi pointed to the spot, incensing the Sardinians so much that both Artur Ionita and coach Rolando Maran were sent off.

VAR reviews have been widely used in Serie A this season but, in many cases, have created rather than avoided controversy.

“VAR is a great instrument but when it is used like that, it becomes a joke,” said Cagliari’s sporting director Marcello Carli.

“It was really difficult to judge.....sometimes those decisions favour you, sometimes they go against you,” he said.

FROSINONE YO-YO ACT CONTINUES:  Frosinone’s second season Serie A has ended in exactly the same fashion as their first — with relegation. Promoted for the first time in 2015, they went straight back down, were promoted again two seasons later and are now on their way back to Serie B where they will be among the favourites to go up next season.

NOW YOU SEE HIM, NOW YOU DON’T:  Inter Milan coach Luciano Spalletti gave one of the shortest press conferences of the season after the 0-0 draw with Udinese — 40 seconds. Greeted by an almost empty room, he answered one question before making his getaway.