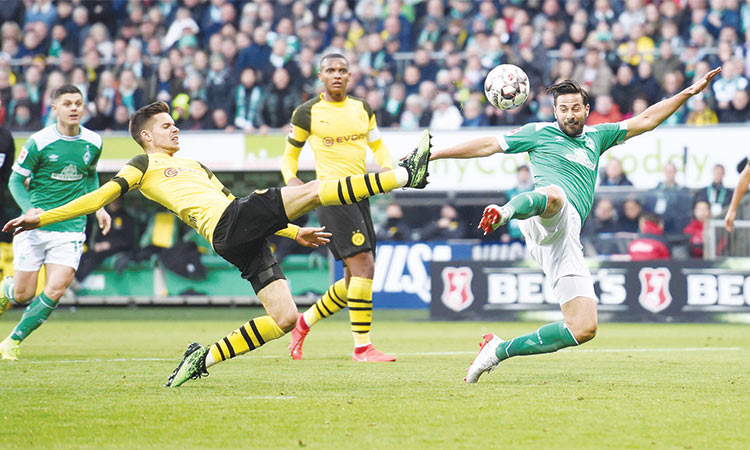 “I am not going to talk about Roman. Whatever happens, he has had a fantastic season and has saved us a lot of points in the past,” Favre told Sky.

Buerki’s error and a goal from Claudio Pizarro all but ended Dortmund’s title challenge and sealed a perfect afternoon for Bayern, after club stalwarts Franck Ribery and Arjen Robben earlier returned from injury to help them to a 3-1 victory over bottom club Hanover.

Dortmund, who were nine points ahead of Bayern in December, must now make up a four-point deficit in the last two games of the season.

Christian Pulisic opened the scoring for Dortmund after just six minutes with a brilliant solo goal, before Paco Alcacer doubled the lead with a fizzing free-kick. With Dortmund in full control on 70 minutes, Buerki allowed Bremen back into the game when he let Kevin Moehwald’s tame shot through his legs, and former Bayern star Pizarro scored a shock equaliser moments later.

Elsewhere, Borussia Moenchengladbach and Hoffenheim both stumbled in the race for the top four, as they shared the points in a 2-2 draw.

Elsewhere, Veteran coach Huub Stevens has completed his mission to keep Schalke in the Bundesliga, after the club secured survival with a 0-0 draw at home to Augsburg on Sunday.

Schalke finished second under Domenico Tedesco last season, but turned to Stevens to guide them away from relegation after Tedesco’s reign imploded this year.

Stevens, who had twice managed the club before and led them to UEFA Cup glory in 1997, took the reins in March with Schalke just four points clear of the bottom three.