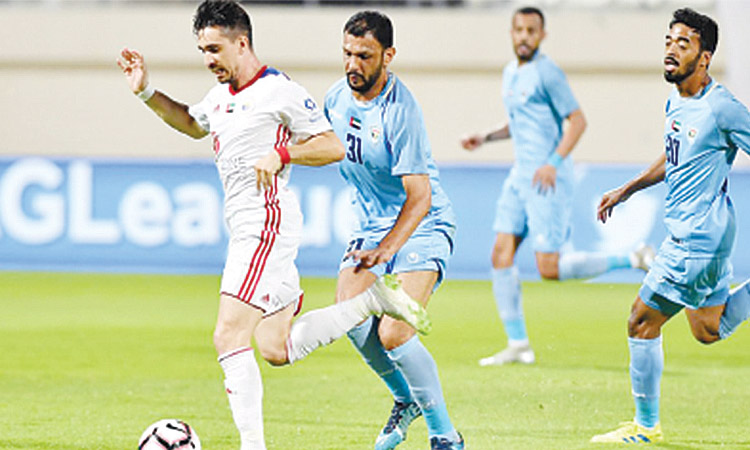 Players of Sharjah and Dibba in action during their Arabian Gulf League match on Friday.

Sharjah remained winless for the third game in a row as they played out a 2-2 draw with Dibba at Khalid bin Mohammed Stadium in matchweek 23 of the Arabian Gulf League on Friday.

Dibba kicked off the game strongly and found themselves 1-0 up after only eight minutes. Diogo Acosta found Yaseen AlBakhit’s cross and made a first-touch finish to give his side a surprise lead.

Sharjah’s response was quick as Shaheen Abdelrahman leveled the scoreline only three minutes later. Abdelrahman found Mohamed Alshehhi inch-perfect corner kick and headed home to make it 1-1.   The King completed their comeback in the 17th minute with Welliton finding the back of the net to give the hosts the lead. The Brazilian forward made a run on the right flank and went one-on-one with the keeper before tapping the ball home.

The Sailors leveled the scoreline only eight minutes after the restart. After consulting the VAR, the referee awarded the Sailors a penalty kick for a foul against Yousef Al Rawashdeh. Driss Fettouhi converted from the spot into the bottom corner to make it 2-2 in the 53rd minute.

Fettouhi came close to adding his second of the night and regaining his side’s lead on the one-hour mark but his effort was saved by Adel Alhosani.

In the first minute of injury time, Sharjah were reduced to 10 men when Majid Surour was shown a straight red card. The King continued to push forward in search of a winning goal but Igor Coronado failed to find the back of the net as the game ended in a draw.  Despite drawing with Dibba, Sharjah continue to top the table on 53 points, six above second-placed Shabab Al Ahli.

Al Jazira are on third spot with 41 points following their 1-3 defeat against Al Wahda on Thursday.

Sebastian Tagliabue netted a brace in Al Wahda victory over Al Jazira at Mohammed Bin Zayed Stadium. The Clarets now sit fifth on 40 points. Al Jazira head coach Damien Hertog admitted his team deserved to lose against Al Wahda but promised the fans that his players will work hard to ensure they are competitive this season.