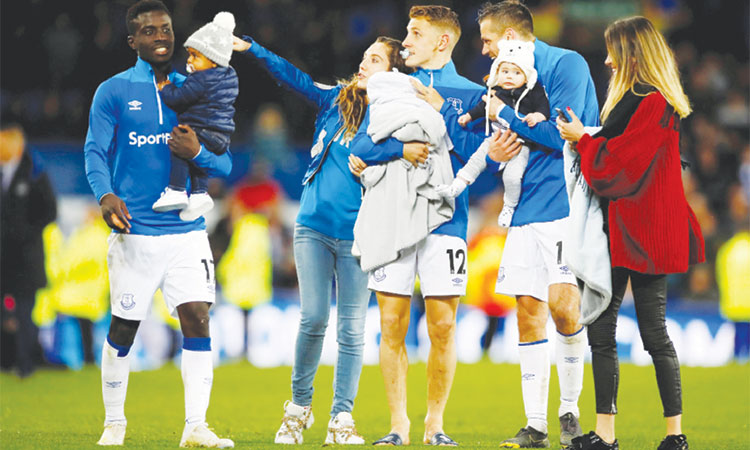 Everton’s Lucas Digne, Idrissa Gueye and Gylfi Sigurdsson with family on the pitch after their EPL match against Burnley on Friday. Reuters

Arsenal have one foot in the Europa League final but know they cannot afford the luxury of taking it easy in Sunday’s match against struggling Brighton as they chase a Premier League top-four berth.

Unai Emery’s team have wobbled badly in the league in recent weeks, losing four out of their past five matches after putting themselves in a strong position.

They are two points behind fourth-placed Chelsea with two matches remaining, the first at home to Brighton on Sunday and the second away to Burnley the following week.

But they still have two chances to reach next season’s Champions League -- by winning the Europa League or moving up a place from their current position of fifth in the Premier League.

Arsenal lead Valencia 3-1 ahead after the first leg of their Europa League semi-final on Thursday.

Victory in that competition guarantees entry into the Champions League next season.

Emery, who said reaching the Champions League again after an absence of two seasons is the club’s “first objective”, is aware that he is not in control of the situation.

“We need to win the next match and if we win against Brighton we are going to the last match against Burnley with the possibility to be in the top four,” he said.

“It’s not in our hands, but we need to win our matches and the first is Sunday. It’s not easy to win each match, for us and for other teams, but the focus for us is to win against Brighton for different situations.

“We are going to play the last match at home and we want to finish at the Emirates with a victory.

“The first objective is to finish in the top four and it will give us the chance.”

Emery confirmed earlier this week that the injured Aaron Ramsey, leaving for Juventus at the end of the season, would not feature again for the club, while veteran goalkeeper Peter Cech is retiring.

The Arsenal boss conceded that qualifying for the Champions League through the league would be tough with third-placed Tottenham, Chelsea and Manchester United also in the mix.

But despite recent hiccups, he is happy with his first season in charge at the Emirates.

“Our progress I think -- when we started the season we lost against Man City and Chelsea and we worked for this process, little by little and at the end of the season now we are with this possibility.

“I think when we started we would have been happy to have today these two opportunities in the Premier League and Europa League to reach our target.” Brighton, who themselves have plenty to play for as they scramble to ensure Premier League survival, have drawn two of their past three matches.

They are on 35 points, four clear of Cardiff, who are in the third and final relegation spot.

“We’ve shown a reaction to that slump in form, and hopefully we can continue that at the Emirates on Sunday,” said striker Glenn Murray.

Solskjaer has not expressed any doubts about his first-choice goalkeeper, but an injury to De Gea’s back-up Sergio Romero has made the decision to keep him in the team easier.

On Friday, Everton kept their slim hopes of a top-seven finish in the Premier League alive as they recorded a fourth consecutive victory at Goodison Park by defeating Burnley.

The Toffees have seen off Chelsea, Arsenal and Manchester United on their patch recently -- by an aggregate score of 7-0 -- and two goals in three first-half minutes proved decisive against the Clarets.

Burnley defender Ben Mee got a telling final touch to Richarlison’s strike while Seamus Coleman headed in on the rebound as Everton ran out 2-0 winners in both sides’ penultimate fixture of the campaign. The win moved Everton up to eighth and to within a single point of Wolves in seventh -- a position that will seal a Europa League berth next season if Manchester City beat Watford in the FA Cup final later this month.

Wolves could extinguish coach Marco Silva’s stated aim of European football with a win over already relegated Fulham on Saturday but this was an impressive way to sign off at home from Everton.

Just as it seemed the visitors had weathered the early onslaught, they fell behind in the 17th minute as their backtracking defence gave Richarlison an invitation to rifle beyond Tom Heaton.

The Brazilian’s left-foot strike from the edge of the area took a slight deflection off the unfortunate Mee, and Burnley’s luck worsened as Everton increased their lead moments later.

Lucas Digne’s rasping effort from a similar distance was parried back into the danger zone by Heaton, allowing Coleman, just onside, to stoop to head into an empty net.

In the end, Burnley could not find a way back into the match, with Everton claiming an eighth clean sheet in their past 10 top-flight fixtures.