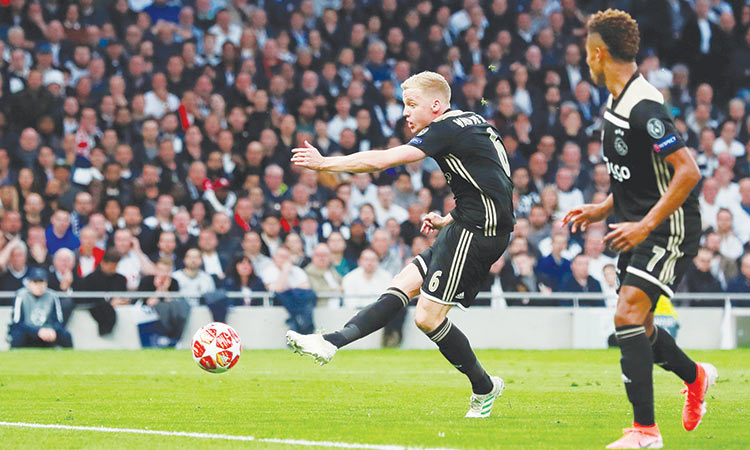 Ajax closed in on a first Champions League final for 23 years as Donny van de Beek’s early goal beat an injury-hit Tottenham 1-0 in the first leg of their semi-final on Tuesday.

Van de Beek’s opener on 15 minutes was just reward for the Dutch side’s first-half dominance as Tottenham badly missed the presence of the injured Harry Kane and suspended Son Heung-min.

Tottenham improved after the break despite another injury blow as Jan Vertonghen had to be helped down the tunnel after a sickening head knock, but lacked the inspiration needed to get back on level terms without their two top scorers.

And Ajax could easily have had an even greater lead to take back to the Johan Cruyff Arena for the second leg next week when David Neres hit the post 10 minutes from time.

Ajax had shown they are not fazed on the road despite the tender age of many of their squad by shocking Real Madrid and Juventus away to reach the last four and started confidently.

Spurs were happy to sit deep and wait for their chances to counter-attack, but that gameplan was undone when Hakim Ziyech’s through ball picked out midfielder Van de Beek who took his time to leave Hugo Lloris prone before slotting into the bottom corner.

Lloris kept his side in the game 10 minutes later from another Van de Beek effort as Ajax threatened to run riot. Fernando Llorente was the hero with the decisive goal as Mauricio Pochettino’s men upset the odds to end Manchester City’s quest for a quadruple of trophies in the quarter-finals.

However, the cumbersome Spaniard struggled to provide the out ball his side needed to relieve the Ajax pressure.

Set-pieces provided Tottenham’s best chance of scoring before the break as Llorente headed wide and Toby Alderweireld over from Kieran Trippier free-kicks.

On top of Kane and Son, Spurs were shorn of the injured Erik Lamela and Harry Winks and lost another key player when Vertonghen came off worst as he contested a high ball with Ajax goalkeeper Andre Onana.

The Belgian was patched up and briefly returned to the field before having to be helped down the tunnel with questions sure to be asked why the Spurs medical staff allowed him to continue.

Despite that latest blow, the hosts reacted well to end the half on top with Vertonghen’s replacement Moussa Sissoko driving a long-range effort wide.

Pochettino’s half-time pep talk had the desired effect as Spurs dug deep into their energy reserves to raise the tempo and intensity of their display after the break.

Yet, the quality needed in the final third to get back on level terms was missing without Kane and Son.

A sweetly struck shot Christian Eriksen shot that was too close to Onana was the best effort they could muster as too often hopeful crosses into the box failed to find a team-mate.

Ajax did not make the most of their chances on the break to kill the tie off, but were unfortunate when Neres’s effort back across Lloris left the French captain helpless only for the ball to rebound kindly off the post.