Chelsea are our toughest opponents yet, says Huetter - GulfToday

Chelsea are our toughest opponents yet, says Huetter 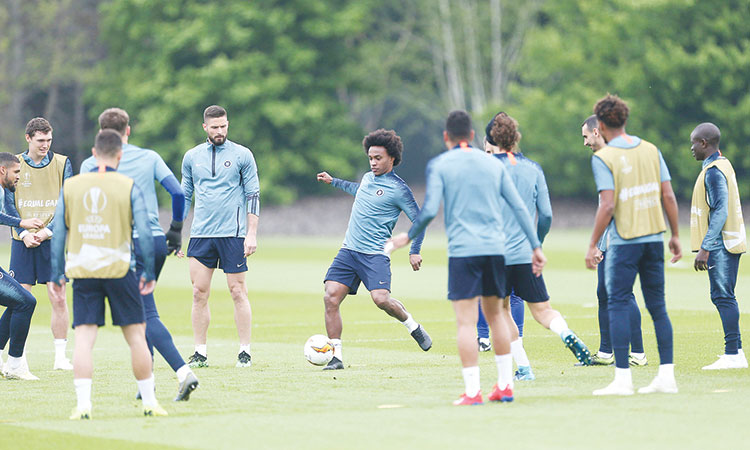 Chelsea’s players attend a training session ahead of their Europa League match against Frankfurt. Associated Press

Eintracht Frankfurt coach Adi Huetter has said that Thursday’s semi-final first leg against Chelsea will be the toughest challenge yet on his team’s epic Europa League journey this season.

Frankfurt have knocked out the likes of Marseille, Inter Milan, Shakhtar Donetsk and Benfica on their way to a first European semi-final in nearly 40 years, but Huetter said on Wednesday that Maurizio Sarri’s Chelsea were a “class above” such opponents.

“They are favourites, there is no doubt about it,” said Huetter.

“We need to do everything right, and play bravely and positively.”

Huetter, 49, claimed to be an admirer of Maurizio Sarri in an interview with kicker last year, and he said he was looking forward to his first meeting with the Italian.

The Frankfurt coach said he had a plan to deal with Chelsea, and identified Belgian star Eden Hazard as the biggest threat.

“We will have to try and play him out of the game, because he is one of the three best wingers in the world in my opinion,” said Huetter.

Yet he also warned that Chelsea were a “Champions League level team” who had quality all over the pitch.

“With players like David Luiz, Cesar Azpilicueta, Gonzalo Higuain, they have an unbelievable amount of experience,” he said.

“We are the most inexperienced team in the semi-finals, but we deserve to be here nonetheless.”

Frankfurt have won hearts across Europe with their fearless football and passionate support in the Europa League this season.

“We are like Ajax in the Champions League, nobody expected us to be in the semi-finals ahead of the season,” said Huetter.

“It has been a long, hard road to get here, and the fans have given us incredible support,” he said.

Frankfurt’s Serbian midfielder Mijat Gacinovic also said his team were underdogs, but could pull off a surprise on Thursday with the fans behind them.

“I watch a lot of Premier League football on TV and Chelsea are one of the best teams in the world for me,” he said.

“But with our fans, we can beat anyone.” Gacinovic, 24, is something of a cup specialist. He scored the decisive goal in Frankfurt’s German Cup final win over Bayern Munich last season, and has notched up two goals and six assists in this season’s Europa League campaign.

The Serbian is expected to start on Thursday, as Croatian attacking midfielder Ante Rebic is serving a one-game suspension.

Frankfurt are also without injured French striker Sebastien Haller, and having won none of their last three Bundesliga games, there are concerns that Huetter’s side may be running out of steam.

“We have to be fresh and alert against an opponent like this,” said Gacinovic.

“The coach always says that everything is in your head, and if you are fresh up there, your body will be fresh too. We won’t be tired tomorrow.” Huetter said his team would have to “suffer” if they were shock Chelsea in the first leg.

“They move unbelievably fast in both directions, so we will have to think quickly,” he said.

“We need to suffer, to throw ourselves into tackles and to stay compact.” Yet the Austrian said he was confident his team were mentally prepared, and backed them to pull off another European surprise on Thursday.

“We have always been brave in every game we have had so far, and we are convinced we can get through,” said Huetter.

“I don’t think we need to do anything mentally. Against Chelsea, you don’t need any extra motivation.”