Al Forsan Ramadan C’ship to begin on May 8 - GulfToday 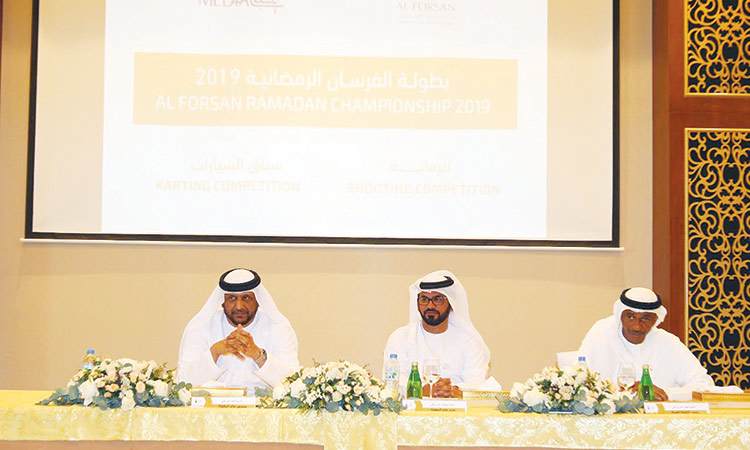 The event will give a good chance to local shooters and motorsports enthusiasts to sharpen their skills as competitions in both shooting and karting disciplines will be held during the 15-day tournament.

“This is the first ever championship to be organised by Al Forsan Resort during the Holy Month of Ramadan. The championship will continue to grow in the coming years as Al Forsan is keen to contribute to the development of sports in Abu Dhabi in particular and the UAE in general. This year’s competition will include Shooting competition and Karting racing,” said Hemeri.

He added: “what distinguishes this championship is that it coincides with the Year of Tolerance. We have derived the values of tolerance from the Arab traditions and culture of the UAE, a country shaped by the vision of our founding father, the late Sheikh Zayed Bin Sultan Al Nahyan, may God rest his soul.”

Hemeri pointed out that Al Forsan International Sports Resort is one of the largest sporting and recreational establishments in the emirate of Abu Dhabi. The resort offers a wide range of Olympic standard sports facilities. Guests have access to a wide range of sporting activities such as archery, horseback riding, karting, paintball, water-boarding and water skiing, all in one place.

Obaid Juma Al Mazrouei, Technical Committee Head said that the tournament is open to all male and female citizens and residents of the country.

He explained that the shooting competitions for men and women will feature two gun types -- the 9mm pistol and the .22mm rifle.

As for the Karting racing, Mazrouei explained that the competitions will be in two categories -- the first for children under 12 years and the second for adults from 12 years and above. Several rounds will be held, and the best lap time for each contestant will be taken to determine the finalists.

Ahmed Saleh Al Breiki, General Coordinator of the Championship said that the tournament is the first of its kind that is organized by Al Forsan Resort and is expected to receive a good turnout. Breiki called on UAE nationals and residents to register for the championship. The last day for registration is May 5.