PSG coach Tuchel hits out at Neymar after fan attack 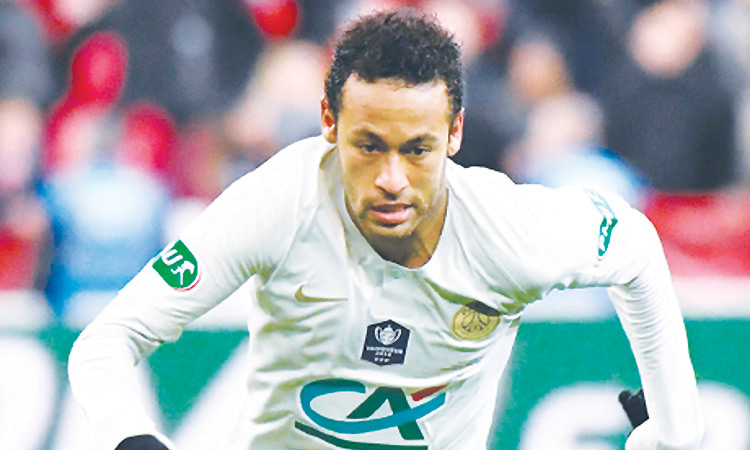 Thomas Tuchel on Monday blasted Neymar for hitting a fan who insulted Paris Saint-Germain players as they filed up to collect their French Cup losers’ medals.

A 28-year-old delivery driver from Nantes had been filming the PSG players and making less than flattering comments about them when a simmering Neymar grabbed the hand that held the mobile phone and shoved it towards the fan’s face.

“I don’t like it. You can’t do that, you just can’t do that,” Tuchel said of the incident, which was caught on video by fans at the Stade de France.

Neymar lashed out on Saturday after his side threw away a two-goal lead to draw 2-2 with Rennes before losing the penalty shootout 6-5 after extra time.

“It’s not easy to go up the steps after a defeat. It’s very difficult for me, for everybody, but we have to accept it,” Tuchel added.

“If we lose, we have to show respect. You can’t get into a fight with a spectator.” The blow continued a bad-tempered end to the evening for PSG. Neymar’s strike partner Kylian Mbappe was sent off for a dreadful tackle with two minutes left in extra time.

The defeat ended PSG’s four-year reign in the French Cup and means that, while they have retained the French league title, they have won none of the cups they entered this season, with the most painful their exit at the last 16 stage of the Champions League to Manchester United.

“Did I act badly?” Neymar asked in an Instagram comment. “Yes. But no one can stay indifferent.”

Neymar is now awaiting punishment from France’s football authorities to go along with the three-match ban UEFA slapped him with on Friday for his foul-mouthed tirade following PSG’s defeat to United.

European football’s governing body sanctioned the 27-year-old after he told match officials “to go fuck yourselves” following United’s 3-1 second-leg win at the Parc des Princes, won by the Premier League side thanks to a controversial penalty awarded via the video assistant referee (VAR) system.

Meanwhile, Neymar was branded a “coward” and “adolescent” by Brazilian media on Monday after the superstar struck a fan who had insulted Paris Saint-Germain players following their French Cup final defeat.

PSG lost 6-5 on penalties after a dramatic game finished 2-2 at the end of extra time on Saturday at the Stade de France.

Numerous cell phones caught the moment that Neymar, the world’s most expensive footballer, hit a fan in the face after he had taunted some of the players as they went to receive their medals.

The incident came days after Neymar was suspended for three Champions League matches by UEFA for a foul-mouthed tirade at match officials following PSG’s shock exit from this season’s tournament to Manchester United.

Neymar later admitted he had made a mistake hitting the fan, writing on Instagram: “Did I act badly? Yes. But no one can stay indifferent.” Brazilian sports commentators disagreed.

“As if his endless failures, his lack of education, antipathy and superficiality were not enough, Neymar has now shown himself to be a coward,” Juca Kfouri wrote in the influential daily Folha of Sao Paulo.

“For all his talent, Neymar will never be equal to Lionel Messi or Cristiano Ronaldo. If he is happy that way, let him enjoy it.”