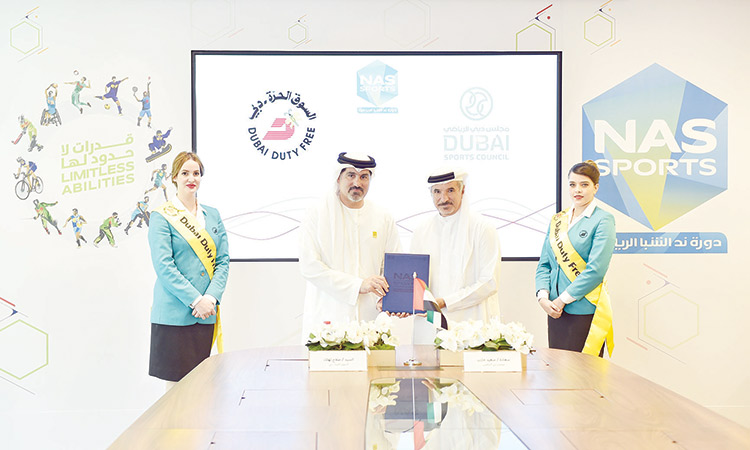 Dubai Duty Free (DDF), one of the biggest travel retail operators in the world, have reconfirmed their support for Nad Al Sheba Sports Tournament by signing a deal with Dubai Sports Council (DSC) to become the event’s platinum sponsors.

“Dubai Duty Free is one of the most recognisable brands in the world today, especially in the leisure and sports sector with their support and sponsorship of major sporting events,” said Hareb.

“We are really pleased to have them onboard once again for the seventh edition of NAS Sports Tournament, which is unique sports events, attracting thousands of people of different nationalities, age, gender and abilities.

“The NAS Sports Tournament, with participants from every segment of our diverse community, is a true reflection of Dubai, which is a melting pot of different cultures with people from more than 200 countries calling it home. Dubai Duty Free shares the same ideals of inclusivity and tolerance, and we are really looking forward to another successful season of the tournament with the support of all our partners, especially DDF.”

“We are pleased to extend our support once again to the NAS Sports Tournament, which is held under the patronage of Sheikh Hamdan Bin Mohammed Bin Rashid Al Maktoum, Crown Prince of Dubai,” said Tahlak.

“The NAS Sports Tournament is the largest of its kind, held during the Holy Month of Ramadan and it has grown bigger each year in terms of participation.

“The Dubai Duty Free fully supports this initiative as it empowers the welfare of various communities and we are delighted that our own staff — UAE nationals and expats — are joining in the wide variety of games listed this year.”

Organised by DSC under the patronage of Sheikh Hamdan, the NAS Sports Tournament is the biggest event of its kind in terms of participation and prize money, and has been held every year in the Holy Month of Ramadan since 2013.

One of the most anticipated events on the country’s sporting calendar, the Tournament has seen more than 22,000 athletes take part over the past six seasons, including amateurs and international legends like Zinedine Zidane and Falcao, and even Ambassadors and Consul Generals of different countries.