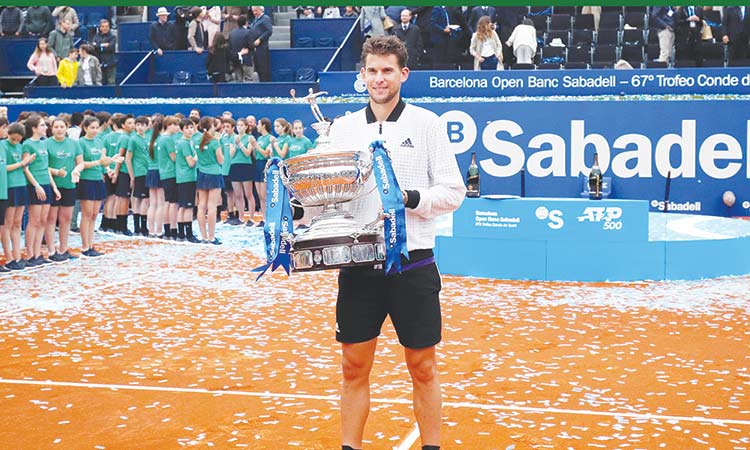 Austria’s Dominic Thiem celebrates with the trophy after winning the Barcelona Open on Sunday. Reuters

A day after knocking out 11-time Barcelona winner Rafael Nadal in the semi-finals, the third-seeded Austrian claimed his second title in four events after beating Roger Federer at Indian Wells last month.

He is also the first Austrian to take the Barcelona title since Thomas Muster in 1996.

“It’s such an honour to win here, only the biggest champions have done it,” said 25-year-old Thiem.

“I’m so happy and proud to join Muster here, now my name is on the trophy.”

Thiem hoisted the weighty 13-kilogram golden trophy in triumph in front of a full stadium on a cloudy, chilly day at a venue named for Nadal.

He has now reinforced his claim for a possible French Open title after losing the Paris final a year ago to Nadal.

Thiem needed just 73 minutes to earn victory over his seventh-seeded Russian opponent, who needed treatment on his shoulder late in the first set. The Austrian got off to a slow start, losing his first serve, but made up for lost time by breaking Medvedev twice in the first set before completely dominating the second.

“I had troubles at the start,” Thiem said. “My slice was not working and he does not miss.

“My slice got better but I had to turn defence into offence, that was my only chance. He’s difficult to play, dangerous from the baseline.

“There were a lot of long, tough rallies in the first set, I’m really happy I made it.”

Thiem will now have a few days off prior to the start of the next big date of the pre-Roland Garros calendar, the Madrid Masters.

The Austrian now owns 13 ATP titles and nine on clay, his favourite surface.

Meanwhile, World number three Petra Kvitova won her second WTA title of 2019 as she beat Estonia’s Anett Kontaveit 6-3, 7-6 (7/2) in the final of the tournament in Stuttgart on Sunday.

The Czech star, a two-time Wimbledon champion and runner-up at the Australian Open in January, succeeds compatriot Karolina Pliskova as champion at the clay-court event.

Kvitova thanked the fans and her coaches, who did not join her in Stuttgart this week.

Having won the Sydney International in January, Kvitova is the first woman to win two titles in 2019, after all of the first 18 WTA competitions of the year were won by different players.

“Congratulations Petra, you are a real role model,” said Kontaveit.

Elsewhere, Croatian sixth seed Petra Martic battled back from a set down to win her first WTA title in Sunday’s Istanbul final against Marketa Vondrousova.

Martic, the world number 40, had lost both her previous top-level finals, but saw off Czech teenager Vondrousova 1-6, 6-4, 6-1 in Turkey.

The 28-year-old had come through the longest match of the year in her quarter-final against Kristina Mladenovic earlier in the week, but had enough energy to brush off a poor opening set.

Vondrousova, 19, has now lost two WTA finals this season after her defeat by Alison Van Uytvanck in Budapest in February, and is still to add to her first title in Switzerland two years ago.