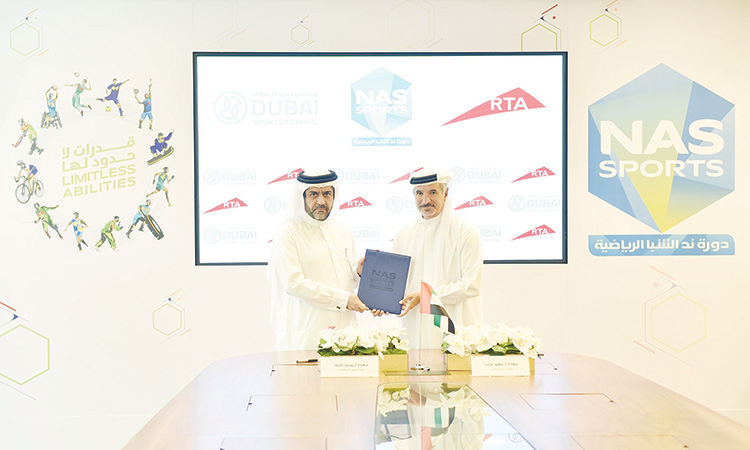 The Dubai Sports Council and Dubai’s Roads and Transport Authority (RTA) have signed a sponsorship agreement under which the RTA will become a strategic sponsor of the seventh edition of the Nad Al Sheba Sports Tournament.

Held under the patronage of Sheikh Hamdan Bin Mohammed Bin Rashid Al Maktoum, Crown Prince of Dubai and Chairman of Dubai Sports Council (DSC), and organised by DSC, the NAS Sports Tournament is the biggest event of its kind in terms of participation and prize money, and has been held every year in the Holy Month of Ramadan since 2013.

It is one of the most anticipated events on the country’s sporting calendar and more than 22,000 athletes - including amateurs and international legends like Zinedine Zidane and Falcao, and even Ambassadors and Consul Generals of different countries - have taken part in the tournament over the past six years.

“We are delighted to sign this sponsorship agreement with RTA, which is a distinctive national entity with a proud history of serving the community and nation,” said Hareb.

“The Nad Al Sheba Sports Tournament is a unique community initiative being organised under the patronage of Sheikh Hamdan, and this partnership only adds more value to the tournament.

“The tournament has achieved a lot over the past six years, boosting the technical levels of our athletes, spreading the culture of sports and physical activity and introducing new sports every year to the schedule. This year, 13 events - including cricket and snowboarding - will be a part of the NAS Sports Tournament.

“So, under the continuous patronage and guidance Sheikh Hamdan and the support of our valued partners like RTA, we are looking forward to another successful season of NAS Sports Tournament.”

Redha added: “We thank Dubai Sports Council for all the efforts they put in every year to make this tournament a success and we are confident the tournament will be an even bigger success this year.

“We are proud to have the name of RTA associated with this hugely popular community initiative, the largest of its kind, and we are looking forward to continuing this partnership in the years to come.”

The RTA has been a strategic partner of DSC for many years, working together on events like Dubai Tour, the Mohammed Bin Rashid Al Maktoum Creative Sports Awards and many others.

The 13 events for this season are - Futsal, Volleyball, Padel, Fencing, Wheelchair Basketball, Futsal for People with Hearing Disabilities, NAS Night Challenge, the 5km and 10km Run, 75km Cycle Race, 3x3 Basketball, Jiu-Jitsu, Cricket and Snowboarding. The sporting action will start on May 8 with Volleyball and Padel matches taking place at the NAS Sports Complex, with the NAS Volleyball final scheduled for May 14 and the NAS Padel finale for May 21. The inaugural NAS Cricket Tournament - featuring 12 teams, divided into four groups, and being played under the 10-over-a-side T10 format - will take place at the Wombats Cricket Ground in DP World (Jebel Ali, Gate 7) from May 8 to 20, while the NAS 3x3 Basketball, popular when it made its debut last season, will be held from May 8-15 at The Block in Dubai Design District.

The NAS Snowboarding competition will take place at Ski Dubai on May 10. NAS Jiu-Jitsu is also a one-day event, scheduled to be held on the penultimate night of the championship, May 23, and the NAS Run is scheduled for May 11.