NAS down Jumeirah to claim League of Mammoths crown - GulfToday

NAS down Jumeirah to claim League of Mammoths crown 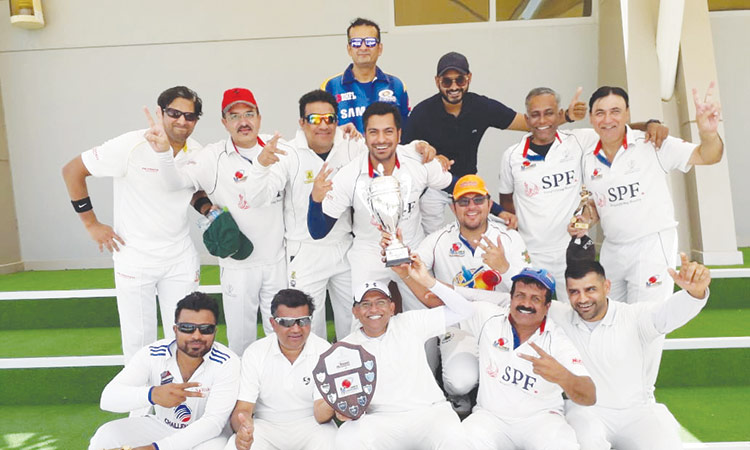 NAS players pose with the trophy after winning the final of LOM against Jumeirah Mammoths .

Put into bat, NAS piled up a fighting 176 from 24.2 overs and did extremely well to bowl Jumeirah all out for 130.

Although they lost opener Sunil Raheja (0) and Sangit Gopinath (6) early in the innings Devrajan Srinivasan (28) and Vinay Tolani (31) steadied the rocking boat of NAS.

Vijay Mehra (39) and CTK Mashood added 45 runs for the sixth wicket but NAS were not yet out of the woods until Man of the Match Sheridan Hadfield’s 16 run blitz from 9 balls (1x6, 1x4) came as a blessing in disguise and propelled them to 176.

Jumeirah’s chase was lukewarm. Apart from Sandeep Raina’s 32 none of the other batsmen could take charge of the match against a disciplined NAS bowling attack.

After Sunil Rajeha and Kapil Gandhi removed the openers CTK Mashood claimed two middle order batsmen and Sheridan Hadfield cleaned up the tail. Nakheel CC finished third and Zabeel finished at the bottom among the four teams but they won two awards. Deepak Patel bagged the best bowler award and Lucky Abbas was declared the Player of the Tournament.

Ocean Fair International scored 175 for eight wickets  in 20 overs. Chasing, Pulse Secure failed to reached the target and were all out for 150 in 19.1overs. Wasim Anwar (23) and Fari Kazmi (23) tried to wage the war but could not take tehir team over the line.