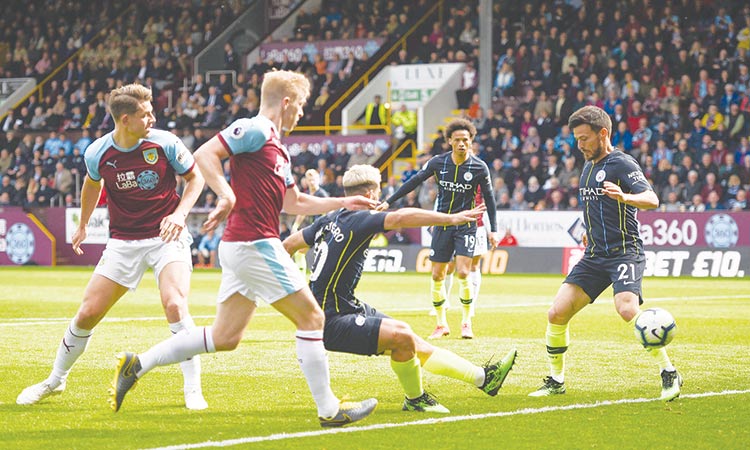 Arsenal’s 3-0 defeat to Leicester means Chelsea now hold a two-point lead over the Gunners in the chase for Champions League football next season with United a further point back in sixth with just two games remaining.

In contrast to the faltering form of all four contenders for third and fourth, as Tottenham also lost at home to West Ham on Saturday, the top two continue to cede no ground in the title race.

City extended their winning run to 12 straight Premier League games and now just need to win their final two at home to Leicester and away to Brighton to retain their title and stretch Liverpool’s long wait to win the league to at least 30 years.

Pep Guardiola cut a frustrated figure as City laboured for the first 45 minutes at Turf Moor.

However, they clicked into gear after the break and wave upon wave of attack on the Burnley goal was finally rewarded after the hour mark when Sergio Aguero’s shot squeezed just 29 millimetres over the line before Matt Lowton hacked the ball clear.

The goal was Aguero’s 20th in the Premier League this season.

“We could have won by more distance, I’m so happy for the victory and now we have a week to prepare and hopefully we arrive at Brighton with the chance to be champions,” said Guardiola.

United halted a run of seven defeats in nine games, but failed to capitalise on Tottenham and Arsenal’s defeats as De Gea, so often his side’s saviour in recent seasons, was at fault again to hand Chelsea a share of the points at Old Trafford.

Ole Gunnar Solskjaer had made five changes to his starting line-up and was rewarded with a bright start as United scored for the first time from open play in just short of nine hours of football through Juan Mata.

De Gea was also at fault for goals in United’s previous three games in defeat to Barcelona, Everton and City.

“David is unquestionable for me,” said Mata of his compatriot.

“His level has been fantastic for this club. The amount of points he has saved us is incredible.

“We all have good and bad moments in our careers but the important thing is how we react.”

Arsenal’s top four challenge has collapsed over the past week, conceding three times in three straight league defeats for the first time since 1967.

The Gunners were dominated from start to finish by Brendan Rodgers’s Leicester, although the visitors were not helped by a 36th-minute red card for Ainsley Maitland-Niles at the King Power.

Leicester were unlucky not to lead long before then, but made the extra man advantage count as Youri Tielemans opened the scoring and Jamie Vardy struck twice late on.

“The second yellow card gave us a lot of problems to control our gameplan and be efficient,” said Arsenal boss Unai Emery.

“We continued with one player less but knowing it was going to be difficult. That has conditioned the result a lot.”

Victory keeps the Foxes in the hunt for seventh, which could reap a place in the Europa League next season if City win the FA Cup. 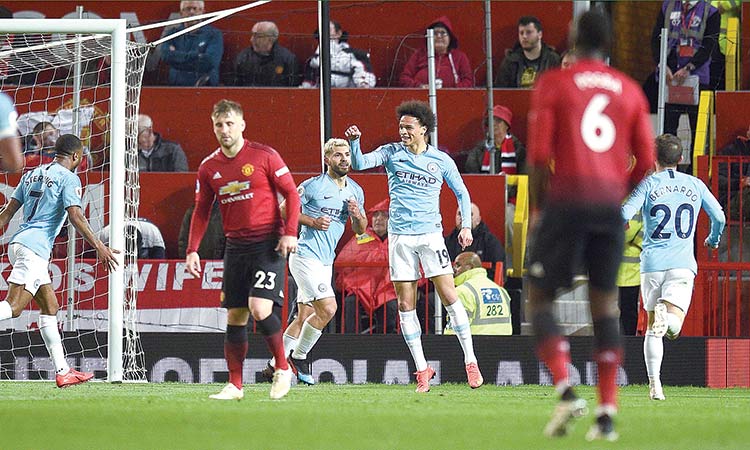