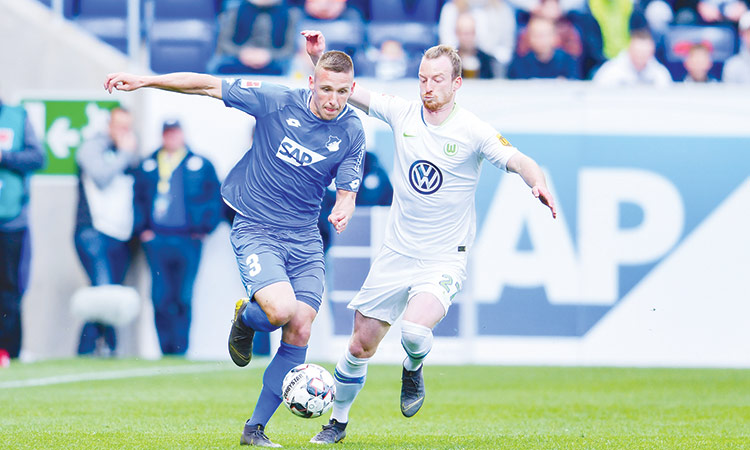 Hoffenheim and Wolfsburg’s players fight for the ball during their German League match on Sunday. Associated Press

Hoffenheim goalkeeper Oliver Baumann fluffed two routine saves as his side lost 4-1 to Wolfsburg and missed the chance to move within a point of the top four.

The usually reliable Baumann made his mistakes in the second half to hand Wolfsburg victory and end a six-game unbeaten run for Hoffenheim.

The defeat is a blow to Hoffenheim’s hopes of European qualification. Julian Nagelsmann’s side remain on course for a Europa League berth in seventh, but are four points adrift of the top four.

Adam Szalai found the net at the end of slick counter-attack to put Hoffenheim in front on nine minutes. Andrej Kramaric then missed a penalty for the hosts, before Wolfsburg’s William curled in a superb equaliser just before half-time.

Despite having made several fine saves in the first half, Baumann gifted Wolfsburg the lead with 20 minutes to go when he let Wout Weghorst’s soft header slip through his fingers at the near post.

The Hoffenheim keeper was beaten at his near post again by a fierce shot from Maximilian Arnold. Weghorst struck again in the 89th minute. The puts Wolfsburg move a point behind Hoffenheim in eighth.

The Belgian international, who is the younger brother of Chelsea star Eden Hazard, told Belgian platform VTM Nieuws that it was now up to the two clubs to complete the transfer.

Various German outlets, including kicker magazine and Bild newspaper, reported in April that Hazard was on the brink of a move to Dortmund after five years at Gladbach. Hazard joined the Bundesliga club on loan from Chelsea in 2014, and completed a permanent move the following year.

His current contract expires at the end of next season, meaning Gladbach risk losing him on a free transfer if they do not sell him this year. 

Elsewhere, a late penalty miss from Tim Leibold spared Bayern Munich a humiliating defeat at Nuremberg but Niko Kovac’s Bundesliga leaders missed the chance to pull away in the title race with a dramatic 1-1 draw at the relegation strugglers.

Bayern had the chance to go four points clear at the top of the table with three games to go after title rivals Borussia Dortmund lost 4-2 to Schalke on Saturday.