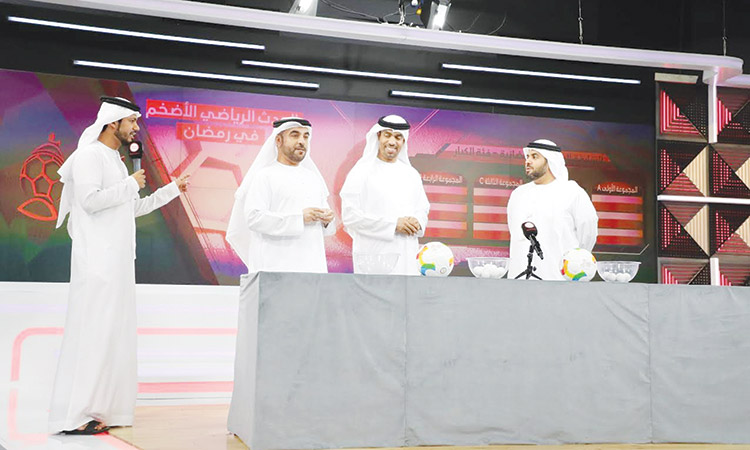 Rashid Al Obaid and other Sharjah Sports Channel officials during the draw for the fourth Sharjah Ramadan Futsal Championship.

Sharjah’s popular indoor football tournament organised during the Holy Month of Ramadan, is back for its fourth annual edition.

A total of 12 professional and six amateur teams in the under-14 age group category will compete for the title in the fourth edition of the Sharjah Ramadan Futsal Championship (SRFC), slated to take place from May 8-19, at the Sharjah Sports Club’s indoor stadium in Al Hazana.

The tournament is organised by the Sharjah Sports Channel, and held under the patronage of Sheikh Sultan Bin Mohammed Bin Sultan Al Qasimi, Crown Prince and Deputy Ruler of Sharjah.

The professional teams will play in a four-group futsal knockout competition, and the six junior sides, which are clubbed in two groups, will compete in a head-to-head format. The draw for the competition was held at the Sharjah Sports Channel headquarters.

The SRFC 2019 organising committee has also announced cash prizes for the winners.

The top team in the senior championship will take home an Dhs200,000 cash prize, and the runners-up will be awarded Dhs100,000.

In the under-14 category, Dhs50,000 will be awarded to the winner and Dhs30,000 to the runners-up. Special prizes have also been allotted for the tournament’s most valuable player, highest goal scorer and the best goalkeeper.

Group A features ‘Al Mufaja’a’, ‘Sharjah Police’ and ‘Fuhood Al Zabeel’; Group B is made up by teams, Leader Sport, Al Embrator and Al Burkan; and Al Hamriya, AI Global and Al Wahdan make up Group C. Finally, the three teams that will represent Group D are, Sport 4 All, Al Shabab and Khorfakkan.

The two groups that make up the under-14 contingent are Sport 4 All, Rich Target and Quattro – in Group A; Al Hamriya, Tamim Group and Wasit Youth in Group B.

He said: “SRFC pumps fresh talent into local football clubs and the national team. The aim of this indoor football championship is to offer our athletes a platform to come together and practice a sport that embodies unity and team spirit – qualities all practicing Muslims try to enhance during Ramadan. It is a great way of bringing the UAE community together too, to enjoy one of the nation’s favourite sport.

To make the SRFC experience even more enjoyable for spectators, valuable prizes including smart phones, tablets, free air travel and gift vouchers will be given away to the audience throughout the 12-day tournament. Daily draws for instant cash prizes will also be held during matches.

A stellar cast of football celebrities and other sporting professionals, famous artists and social media influencers,  and an impressive selection of distinguished guests have been invited to the tournament – all of whom the spectators will have the chance to meet and interact with.