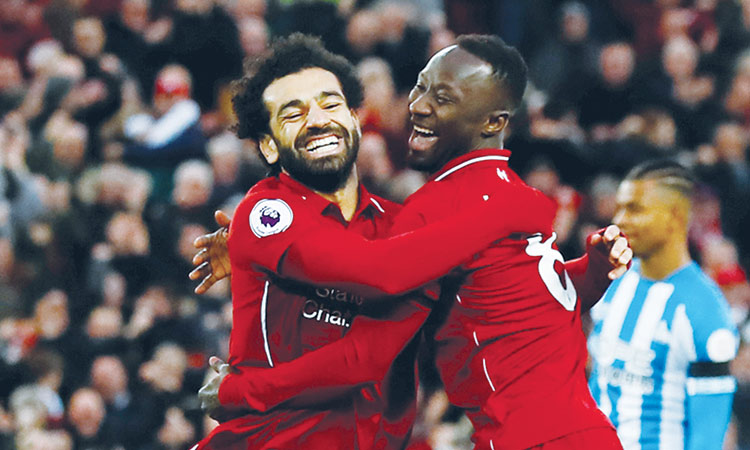 Liverpool’s Naby Keita celebrates with Mohamed Salah after scoring their first goal against Huddersfield during their EPL match on Friday. Reuters

Jurgen Klopp’s side struck three times in the first half at Anfield, with Keita bagging Liverpool’s fastest ever Premier League goal before Sadio Mane and Mohamed Salah also got on the scoresheet.

Mane and Salah netted again in the second half to move the Reds two points clear of second placed Manchester City, who will regain pole position if they win at Burnley on Sunday.

The lead at the top of the table has now changed hands for a record 29th time as this memorable season heads for a thrilling conclusion.

Unfazed by City’s crucial win at Manchester United on Wednesday, Liverpool are keeping their end of the bargain in their chase for a first English title in 29 years.

Liverpool required just seconds to demonstrate that the chances of an upset from already relegated Huddersfield were non-existent.

Their goal-spree also ate into the eight-goal deficit by which they trailed City in the goal difference column before kick-off.

Keita started the rout with the first of those goals, Liverpool’s quickest of the Premier League era, an effort which showcased so much of their high-pressing energy and effort.

Goalkeeper Jonas Lossl played a pass out of the Huddersfield area to Jon Goren Stankovic, who was immediately closed down by Keita and robbed of the ball.

The midfielder quickly exchanged passes with Salah and advanced into the area before beating Lossl with an accomplished 15-yard finish, despite the attempts of Stankovic to recover.

There followed some moments of minor anxiety for home supporters, although the nerves were clearly not shared by their players and, on 23 minutes, the lead was predictably doubled.

Full-back Andy Robertson appeared on the end of a patient, intricate passing move, lobbed in a magnificent left-wing cross and Mane split his markers to head in his 11th goal in his last 13 games.

Daniel Sturridge, starting for the first time in the calendar year, and Jordan Henderson both shot disappointingly over.

But, in first-half stoppage-time, Klopp’s side put the result beyond doubt.

It came from the pass of the evening, from right-back Trent Alexander-Arnold just inside his own half, whose magnificently-weighted ball hung perfectly in the swirling Anfield wind for Salah, who arrived ahead of Lossl and lobbed the ball over the advancing goalkeeper’s head.

It continued the incredible contributions made by both full-backs to Liverpool’s attacking cause this season, with Robertson having produced his 10th Premier League assist and Alexander-Arnold his ninth in that dominant first period.

Alisson Becker saved well from a shot by Juninho Bacuna, but the second half was simply a question of how many more goals Liverpool could score.

Mane added his 20th league goal of the season on 65 minutes as he headed in impressively from six yards via another excellent cross, this one from Jordan Henderson.

A successful evening for Klopp and his team continued as he was able to bring on England midfielder Alex Oxlade-Chamberlain, out for 12 months with knee ligament injury, as a 73rd minute substitute.

He almost scored within minutes, taking a through ball from fellow sub Xherdan Shaqiri and showing clever footwork before shooting straight at Lossl.

Shaqiri nearly set up a hat-trick for Mane, whose header hit the post.

And it was Shaqiri who also started the move for the 83rd minute fifth goal, finding Robertson whose cross was turned in from point-blank range by Salah.

Klopp saluted his “outstanding” Liverpool title chasers after they stormed back to the top of the Premier League.

Klopp was delighted with the way his players kept the pressure on the champions.

“We are happy with the points we have and now we are focused on the next game,” Klopp said.

“We have a mindset that works and we try to create problems for each opponent by working hard.

“It’s obviously an outstanding group of players, who did well against a Huddersfield side who are much better than the result shows.

“They had proper counter attacks so we needed to be patient and we scored wonderful goals.”

Liverpool have won their last 10 matches in all competitions, their best winning run since May 2006 when they reeled off 11 in a row.

“We did everything to make the boys aware of how difficult the game could be. That goes out of the window after 15 seconds,” Klopp said of Keita’s perfect start.

“He is a complete midfielder. I don’t know how many balls he blocked tonight.”

Liverpool received a further boost as England midfielder Alex Oxlade-Chamberlain came off the bench for his first place in a year after a serious knee injury.