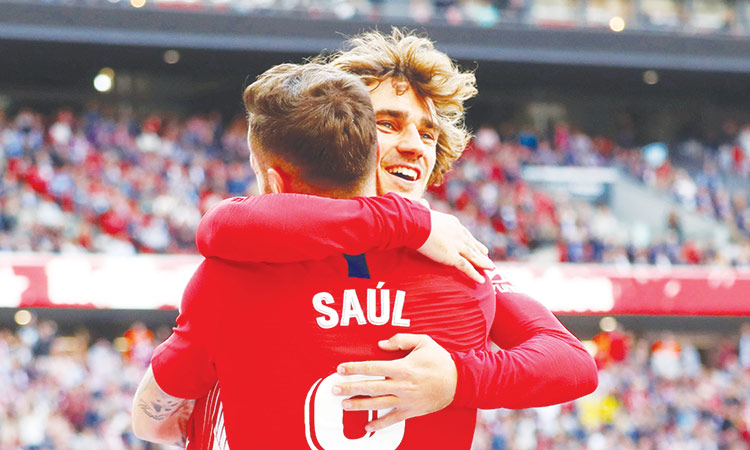 Atletico Madrid’s Saul Niguez celebrates with Antoine Griezmann after Joaquin scored an own goal during their Spanish League match on Saturday. Reuters

Ernesto Valverde’s side would have been crowned champions for the eighth time in 11 seasons ahead of their home clash with Levante later had Atletico lost to relegation-threatened Valladolid, but Joaquin Fernandez’s own goal was enough to seal the three points and delay the Barca title party. The win means Diego Simeone’s Atletico are six points behind Barca, who now have to beat Levante at the Camp Nou later in order to take the title with three matches to spare before they host Liverpool in the first leg of the Champions League semi-finals.

Should Barca beat struggling Levante as expected, they will hold their nine-point lead over Atleti, who will no longer be able to overtake the Catalans thanks to their inferior head-to-head record.

Valladolid meanwhile stay 17th, just one point and a place away from the relegation zone after a match they will feel they were unlucky to lose.

Atletico were far from their intense best, and the first half was a drab affair enlivened by a few Valladolid pot shots and a fine save from Jordi Masip, who did well to tip away Antoine Griezmann’s free-kick.

However they upped their game early in the second half and got the breakthrough in the 66th minute when Fernandez launched himself at Saul Niguez’s cross from the left and headed the ball past Masip into his own goal.

That didn’t stop Valladolid though, and the away side thought they would be given a chance to equalise from the spot with just four minutes left when Santiago Arias appeared to handle a cross, only for referee Mario Melero Lopez to give a corner following a long VAR check.

They then forced saves from Jan Oblak before Fernando Calero hit the post with a header two minutes into stoppage time, but they couldn’t make their late flurry count.