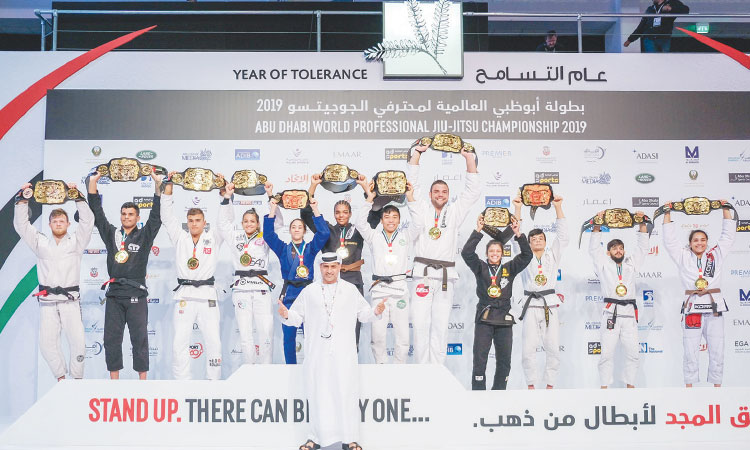 Winners of the Abu Dhabi World Professional Jiu-Jitsu Championship pose with officials during the presentation ceremony.

The world of jiu-jitsu united in a spectacular show of unity and tolerance as Abu Dhabi solidified its standing as the sport’s global home following an action-packed finale at the Abu Dhabi World Professional Jiu-Jitsu Championship (ADWPJJC) 2019 on Friday.

The event was held under the patronage of His Highness Sheikh Mohamed Bin Zayed Al Nahyan, Crown Prince of Abu Dhabi and Deputy Supreme Commander of the UAE Armed Forces.

At the end of 12 thrilling matches on the Mubadala Arena mats, Brazil topped the country rankings with a stunning total of 11 gold medals and 3 silvers. The UAE and the UK tied second overall with two silver medals. Norway came third with one gold.

The UAE won two silver medals through Faisal Al Ketbi in the men’s 85kg division and his colleague Yahia Al Hammadi in the 110kg division.

At the end of the finals, Sheikh Nahyan awarded gold, silver and bronze medals to the newly-crowned jiu-jitsu heroes.

After the finals, Sheikh Tariq said: “Every year the Abu Dhabi World Jiu-Jitsu Championship steps up another level. It was a great achievement for the UAE to have Faisal and Yahia in the black belt World Pro finals – they can be very proud, we all should, of their achievements.”

Major names from the world of jiu-jitsu and mixed martial arts were also in attendance, including Panagiotis Theodoropoulos, President of the Jiu-Jitsu International Federation, who said: “This championship always attracts the best-of-the-best, but the quality is getting even higher. Abu Dhabi has done great things for our sport, in bridging the gap between amateur and professional levels, and making it accessible to people of all ages - from children through to older adults.”

After a successful 11th edition of the world’s most prominent jiu-jitsu competition, Hashemi, said: “Abu Dhabi and the UAE have written another exciting chapter in the pages of jiu-jitsu history. The Abu Dhabi World Professional Jiu-Jitsu Championship continues to go from strength-to-strength, as evidenced by the truly world-class field of international champions gathered in Abu Dhabi – the global home of jiu-jitsu – this year.

In the 85kg final, a split decision by judges saw the UAE’s Faisal Al Ketbi lost to Brazil’s Rudson Matheus, 23, of Brasa Cta Team. Only seconds before the six-minute match had elapsed, Ketbi had a penalty overruled by the judges ensuring the two athletes finished their final with exactly the same scorecards of two points, one advantage and two penalties each. The Emirati hero raised his arm in victory, only to plunge to the mat in disappointment when the referee awarded the match to Matheus.

Matheus said: “I feel good with this win, I’ve waited a long time for this championship. Faisal is a great guy and he represents his country so well. It’s tough for him today, but he performed really well. I am very happy to win in Abu Dhabi - today is a good day for me.” 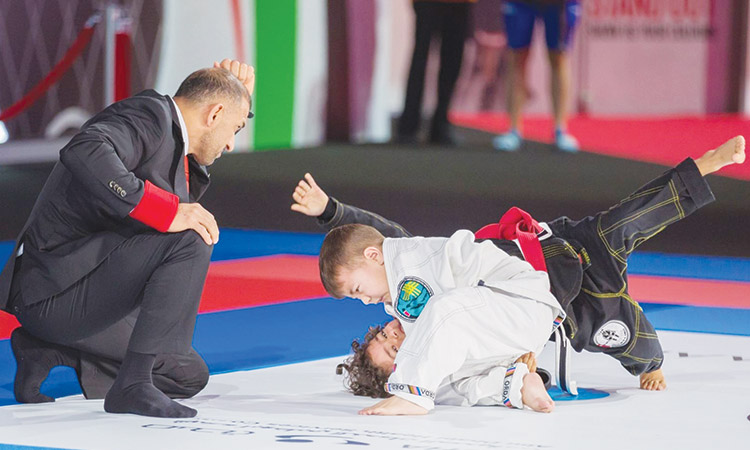