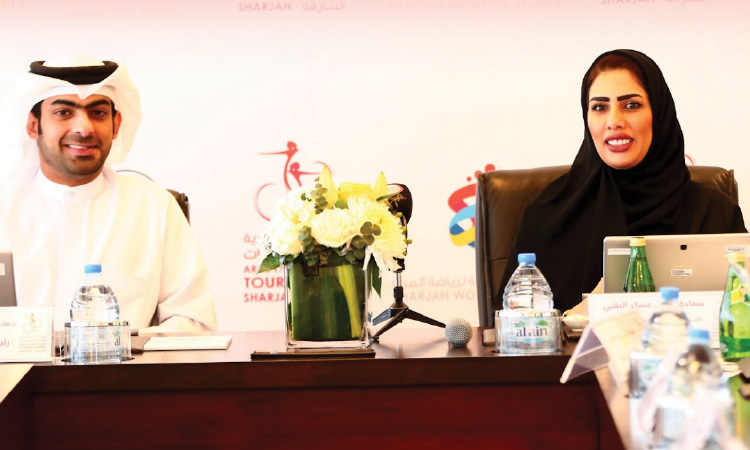 Around 70 clubs from 16 Arab nations with 1,500 participants are expected to take part in the 2020 edition of the Arab Women Sports Tournament (AWST). The figures of number of participants were disclosed during an AWST Supreme Organising Committee meeting held at the Radisson Blu Hotel in Sharjah on Thursday.

During the meeting the committee also discussed ongoing plans and the agenda for the fifth edition of the Arab world’s largest women’s sporting championship, slated to take place in 2020.

Presided over by Sheikh Khalid Bin Ahmed Al Qasimi, Chairman of AWST’s SOC, the meeting discussed the organisational structure of the committee and its responsibilities during the preparation phases of AWST 2020.

The meeting expressed confidence in the increase in number of participating clubs and athletes from Arab countries. Basketball, volleyball, table tennis, fencing, archery, shooting, athletics, show jumping and karate are the sports that will feature in the event.

Addressing the meeting, Sheikh Khalid said: “Since its inception, AWST has highlighted women’s sports in the UAE and in Sharjah, in particular. The continued support and generous patronage of Her Highness Sheikha Jawaher Bint Mohammed Al Qasimi, Wife of His Highness the Ruler of Sharjah, Chairperson of the Supreme Council for Family Affairs and Chairperson of Sharjah Women’s Sports (SWS), has laid the foundation for Arab female athletes to train, compete professionally and grow. It offers them an ideal platform to showcase their potential and capabilities.”

He added: “The untiring efforts of all local and Arab organisations involved have contributed greatly to advancing the state of women’s sports in the region. Together, we will push forward on this journey to fulfil the aspirations of Arab sportswomen.”

Nada Askar Al Naqbi, Deputy Head of AWST’s SOC and Head of AWST’s Executive Committee, and Director General of SWS, said: “AWST has become an exceptional event on the calendar of local and regional women’s sporting events. It continues to attract new faces, established athletes as well as professional players.”

She continued: “Sheikha Jawaher’s vision has led to the creation of a conducive environment for all sportswomen. It has contributed to bringing women’s sports into the spotlight and enabled athletes to redefine their athletic skills and expertise and win the most prestigious titles.”

Naqbi attributed this resounding success to the tremendous support and attention given by Sheikha to various sporting activities. The many local and international platforms and initiatives launched by her had enabled Emirati and Arab women to attempt groundbreaking achievements and compete internationally.

She underlined AWST’s commitment to environmental safety standards and green initiatives in line with Sharjah’s leading sustainability and eco-friendly practices.

Naqbi offered attendees a deeper insight into AWST’s awards and trophies and reiterated AWST’s adherence to anti-dumping rules in compliance with the highest standards of transparency and disclosure.