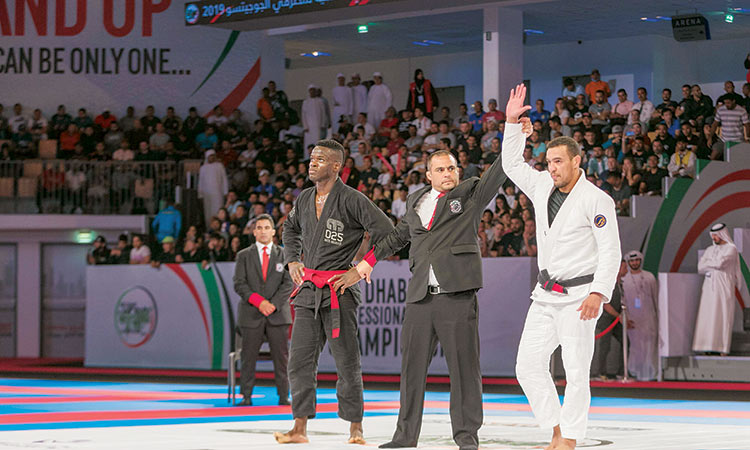 UAE’s Faisal Al Ketbi celebrates after his victory in the semi-finals of the Abu Dhabi World Professional Jiu-Jitsu Championship.

Yahia Al Hammadi and Faisal Al Ketbi will lead UAE charge for the gold medals in the 110kg and 85kg respectively as the Abu Dhabi World Professional Jiu-Jitsu Championship (ADWPJJC) heads for a dramatic finale on Friday.

“It feels very nice to be in the final,” said Ketbi, who is also contesting his first World Pro final. I’ve had a very hard season training with my new coaches and building a strategy for this event – it’s gone the right way and we’ll have a good strategy for the final. It’s always nice having so much support and it’s a responsibility that I cherish.”

“As we celebrate the 11th edition of the Abu Dhabi World Professional Jiu-Jitsu Championship, we are anticipating a grandstand finish to herald the beginning of what will be a glorious championship’s second decade for a world-class event which continues to underline Abu Dhabi’s standing as the home of jiu-jitsu,” said Dhaheri.

With seven male black belt and five female brown/black weight division titles on the line in Friday’s finals, athletes from nine countries will battle for the gold medals.

The 77kg division will see the UK’s Oliver Lovell and Norway’s Tommy Langaker go head-to-head in the only black belt final not featuring a Brazilian athlete, while the US’s Isaac Doederlein and Brazil’s Paolo Miyao will face-off in with 69kg final.

The 62kg final will be contested by Brazilian duo Joao Gabriel Sousa, the world No. 1, and Joao Miyao, with fellow Brazilians Hiago George and Carlos Alberta Silva battling for 56kg gold.