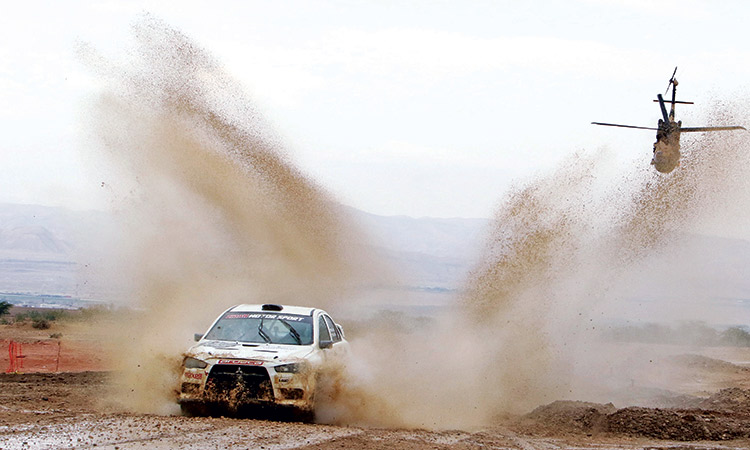 xpertise and skills of the drivers will be put to the test at the Jordan Rally.

Nasser Saleh Al Attiyah is the clear favourite to take an eighth successive and an unrivalled 13th outright victory in the Jordan Rally when action roars into life with the opening Panorama super special stage of 16.92km, near Mount Nebo on Friday morning.

At the wheel of his factory-built and Autotek-run Volkswagen Polo GTI R5, the Qatari won all 11 special stages on his home event last month and heads into two days of rallying action in the Dead Sea and Jordan Valley areas having never lost a timed test in the Volkswagen.

Competitors from 10 nations were flagged away from the start at Abdali Boulevard in Amman on Thursday and three of those, in particular, will be trying to hunt down Attiyah and put a stop to his remarkable run of success.

Four-time local champion Marouf Abu Samra (1996, 2001, 2013 and 2014) won the opening round of this year’s Jordan National Championship in a Ford Fiesta R5 run by Motortune and is relishing the challenge of competing against the 48-year-old three-time Dakar winner. Abu Samra teams up with former world ju-jitsu champion Malek Hariri.

Abdulaziz Al Kuwari shadowed Attiyah to the finish of the opening round in Qatar and he and Marshall Clarke will compete in Jordan with a Škoda Fabia R5 run by FN Speed and MC Racing.

The former WRC 2 front-runner was the only driver able to come anywhere near Attiyah’s stage times last month and will be keen to overturn a nine-point deficit in the five-round championship.

Qatar’ s Nasser Khalifa Atya finished as the runner-up in the regional series way back in 1993 and returned to action in Kuwait last year.

He tackled his home event with Italian navigator Nicola Arena last month and finished fourth overall in a Ford Fiesta R5, the same car that he hopes will guide him to a podium finish on his return to the stages in Jordan for the first time since 1996 - the year that also marked the last time that King Abdullah II took part in a round of the MERC in an M-Sport Ford Escort.

Reigning champion Meshari Al Thefiri is the man to beat in the MERC 2 category and the Kuwaiti is looking for a strong start on the 21-stage event this weekend. He was the class of the field in Qatar and finished over 18 minutes ahead of his nearest rival in sixth overall.

Competition will be even more intense in Jordan. Defending National Champion Khaled Juma was third overall in a recent event at the Dead Sea and heads a local contingent that includes Ihab Al-Shorafa and Shadi Shaban.

Lebanese rookie Alex Feghali takes his first rallying footsteps outside Lebanon to take part in a Motortune Mitsubishi alongside fellow countryman Ahmad Khaled, while Saudi Arabia’s Said Al Mouri takes a break from circuit racing and drifting to take part in the event for the first time in several seasons alongside Amr Refai.

On Friday, crews will tackle two loops of five stages and one pass through a super special stage at the Dead Sea to wrap up the day’s proceedings at 16.57hrs.