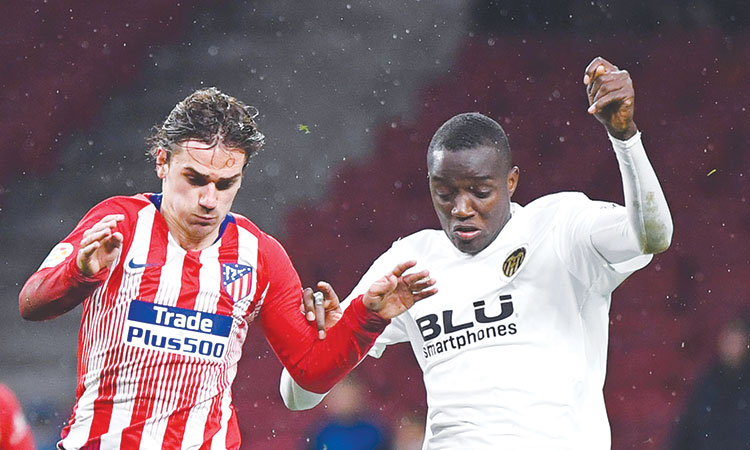 Atletico Madrid delayed Barcelona winning La Liga by a few days at least after Alvaro Morata and Antoine Griezmann each scored in a 3-2 victory over Valencia on Wednesday.

Defeat at the Wanda Metropolitano would have crowned Barca kings of Spain for a 26th time in their history, with the Catalans now set to celebrate at their own Camp Nou on Saturday instead.

A Barcelona win there over Levante will wrap up their fourth league triumph in five years and they could even be home and dry before kick-off, if Atletico fail to take a point at home to struggling Real Valladolid earlier in the day.

Regardless, success for Ernesto Valverde’s side is surely now only a matter of timing given Atletico remain nine points behind the leaders with four games left to play. Real Madrid, who visit Getafe on Thursday, are 16 adrift.

If Getafe win, they will also move five points ahead of Valencia, whose chances of snatching fourth place and Champions League qualification would now appear remote.

But there will be some satisfaction at least for Atletico in making Barcelona win it on their own terms while also avoiding the embarrassment of conceding the title with a loss in front of their home fans.

Angel Correa’s stunning strike in the 81st minute proved the winner after Valencia had fought back, Kevin Gameiro and a Dani Parejo penalty twice pulling them level after goals from Morata and Griezmann.

Morata’s early strike continued his excellent form since his move to Atletico in January, his finish at the back post taking his tally to six goals in 13 games for the club.

Griezmann, meanwhile, back from suspension, now has 25 goals in all competitions this season, an impressive return, particularly in a side not renowned for its creativity.

Atletico were ahead inside 10 minutes as Juanfran’s cross met the outstretched foot of Morata at the back post.

It was no less than they deserved for an aggressive opening but Valencia grew into the half and equalised shortly before half-time.

Francis Coquelin’s crossfield pass picked out Carlos Soler, who cushioned inside to Santi Mina. Mina flicked the ball brilliantly between Diego Godin and Stefan Savic before squaring to Gameiro, who had time to pick his spot.

Atletico regrouped during the interval and were back in front four minutes after, Griezmann jumping ahead of Jose Gaya to nod in Thomas Lemar’s cross.

But Valencia came again and a chaotic contest took another twist when Gameiro’s shot was shown by VAR to have been blocked by the arm of Saul Niguez. Parejo powered into the corner.

The game was in the balance as Griezmann glanced a header wide before Correa, on as a substitute, provided the winning touch. Thomas Partey played into his feet but Correa did the rest, turning, twisting and then bending the ball inside Neto’s left-hand post. Barca will have to wait.

Meanwhile, the Spanish Super Cup could be played in Saudi Arabia from 2020 after the president of the Spanish Football Federation (RFEF), Luis Rubiales, admitted on Wednesday the move is a “possibility”.

But Rubiales faces opposition to the move after the organisers of La Liga said it would not support the change.

According to a report in newspaper Marca on Tuesday, the RFEF is negotiating a six-year deal for the competition to be played in the Middle-East from January 2020.

“It’s a possibility,” Rubiales said during a media breakfast with journalists in Madrid.