Chennai back on top after Watson wallops Hyderabad - GulfToday

Chennai back on top after Watson wallops Hyderabad 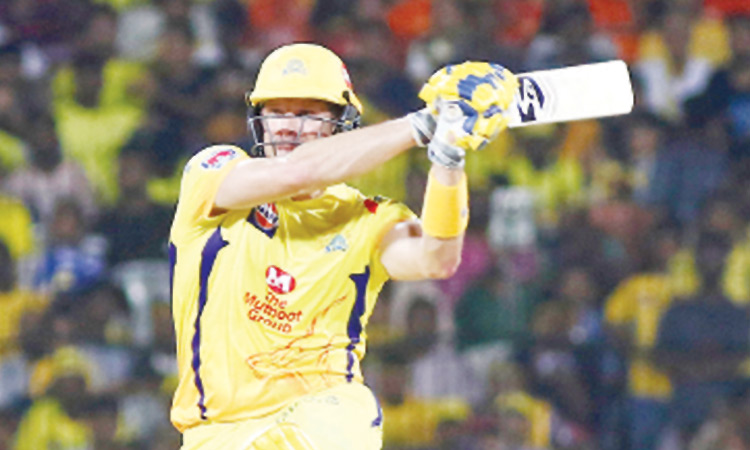 Powered by a 53-ball 96 from opener Shane Watson, Chennai Super Kings (CSK) stormed back after two straight losses to beat Sunrisers Hyderabad (SRH) by six wickets in an Indian Premier League (IPL) clash at the MA Chidambaram Stadium in Chennai on Tuesday.

This win takes Chennai back to the top of the IPL table and on the brink of qualification for the playoffs.

CSK began their chase sluggishly, with Bhuvneshwar’s first over being a maiden. Faf du Plessis was the first to go, run out by Deepak Hooda for 1 in the third over when CSK had just 3 on the board.

Watson survived when on 33 was dropped by wicketkeeper Jonny Bairstow off the bowling of Sandeep Sharma. CSK were 69 at this stage.

Chennai’s 150 came in the 16th over. Watson who was then on 89, missed his century by four runs when he was caught behind off the bowling of Bhuvneshwar. His 96 included 9 fours and a six.

The wicket of Ambati Rayadu (21 off 25 balls) claimed by Sharma, when the scores were tied, only made the match a bit more interesting, but there were no further hiccups and Kedar Jadhav (11 off 10) took CSK to a well-deserved win in the end.

Pandey remained unbeaten on 83 off 49 balls (7x4, 3x6) but could not lead his team to an imposing total as Sunrisers managed only 51 runs in the last six overs after Warner’s dismissal.

Warner (57; 45 balls, 4x3, 6x2) cracked his seventh fifty this season as the dashing southpaw combined with Pandey for a 115-run stand for the second wicket which formed the bedrock of Sunrisers’ innings after CSK skipper MS Dhoni put them into bat.

For CSK, Harbhajan Singh was the pick of the bowlers with figures of 2/39 in four overs.

The visitors lost Jonny Bairstow (0) -- playing his last IPL game -- early, as the England stumper-batsman was out caught behind trying to cut Harbhajan.

From there on, Warner and Pandey paced their innings perfectly as Sunrisers raced to 91/1 at the halfway stage.

Harbhajan removed Warner in the 14th over with a slower one which the veteran Australian failed to read and came down the track only for Dhoni to effect a brilliant stumping.

Vijay Shankar (26; 20b, 4x2, 6x1) then joined hands with Pandey for a 47-run partnership before holing out to Ravidra Jadeja at deep midwicket off Deepak Chahar.

Shankar never really got going and after he was removed, Yusuf Pathan (5 not out) also could not up the ante.

Bhuvneshwar was captaining SRH in place of Kane Williamson who had to return home for personal reasons.

Left-arm South African fast bowler Beuran Hendricks has signed with the Mumbai Indians as a replacement for the injured Alzarri Joseph for the remainder of the ongoing IPL.

Joseph picked up an injury during MI’s game against Rajasthan Royals on Apr.13. The West Indian pacer had hurt his right arm while trying to stop a boundary hit.

Joseph was picked as a replacement for Adam Milne and went on to make a dramatic entry into the IPL with a record-breaking spell of six for 12 against SRH. Three days later, the right-arm pacer hit the winning runs against Kings XI Punjab in his first home game. However, he bowled just two overs in that game, in which he conceded 22 runs, going wicketless. Joseph has featured in nine Tests and 16 ODIs for the West Indies so far.

Hendricks comes in as a replacement, signing up with his second IPL franchise, having represented Kings XI Punjab in the past. The left-armer has played two ODIs and 10 T20Is for South Africa.

Mumbai Indians will take on Chennai Super Kings (CSK) in their next encounter in Chennai on Apr.26.