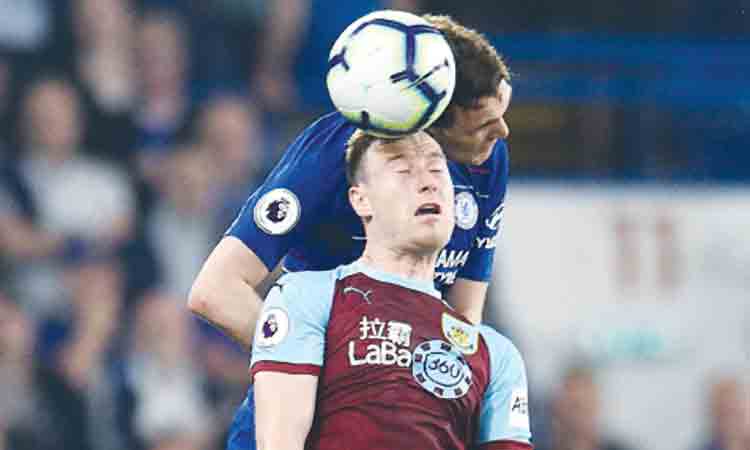 Chelsea accused Burnley of time-wasting and playing “anti-football” after Blues boss Maurizio Sarri was sent off before a touchline skirmish marred their frustrating 2-2 draw on Monday.

In a frantic opening 24 minutes at Stamford Bridge, Gonzalo Higuain put Chelsea ahead, only for Burnley’s Ashley Barnes to punish more dismal defending from the Blues.

Without a win in their last two league games, Chelsea will take only slender comfort from climbing one point above fifth placed Arsenal into fourth place, level on points with third placed Tottenham.

Chelsea would have gone third with a victory, but instead they have now played a game more than top four rivals Tottenham, Arsenal and Manchester United, who are three points behind in sixth.

It was a missed opportunity after defeats for Tottenham, Arsenal and United at the weekend and Chelsea were booed off at full-time.

In a fitting coda to a damaging evening, Sarri was sent to the stands for protesting in the final seconds before several members of the Blues bench were involved in a tetchy touchline clash with their Burnley counterparts.

Sarri’s assistant Gianfranco Zola said his boss was so “emotional” after the game that he couldn’t fulfil his media duties.

“He was very upset because he has heard not good words towards him from the Burnley bench. The only reason he walked over there was to get our players to go into position, he was trying to help the ref,” Zola said.

Zola took a swipe at Burnley’s perceived gamesmanship, which included Clarets keeper Tom Heaton being booked in the first half for time-wasting.

“We are unhappy. There was too much time wasting. Five minutes injury time wasn’t enough to compensate. We couldn’t build important rhythm,” Zola moaned.

“We expected it to be a tough game. We didn’t expect so much time wasting. We expected (referee) Kevin Friend to give more extra time. That’s why we’re very unhappy.”

Chelsea defender David Luiz went even further in his criticism of Burnley.

“It’s anti-football. Wasting time all the time, especially when you have the ball. Their players went to the floor and stopped the game,” he said.

Now Arsenal can replace Chelsea in fourth if they avoid defeat at Wolves on Wednesday.

“We need to improve but we’re in a good way. We care, as we showed today,” Zola said.

Adding to Sarri’s problems, he was hit by first half injuries to France midfielder Kante and England winger Callum Hudson-Odoi.

Brushing off the bench-clearing clash, Burnley boss Sean Dyche said: “By the time I turned round there was something going off in the tunnel.

“I don’t know what you can call it now. Handbags? Manbags? Bumbags?”

Chelsea were stunned in the eighth minute when Hendrick’s rocket put Burnley ahead.