Celtics sweep Pacers out as Warriors and Raptors roll on - GulfToday

Celtics sweep Pacers out as Warriors and Raptors roll on 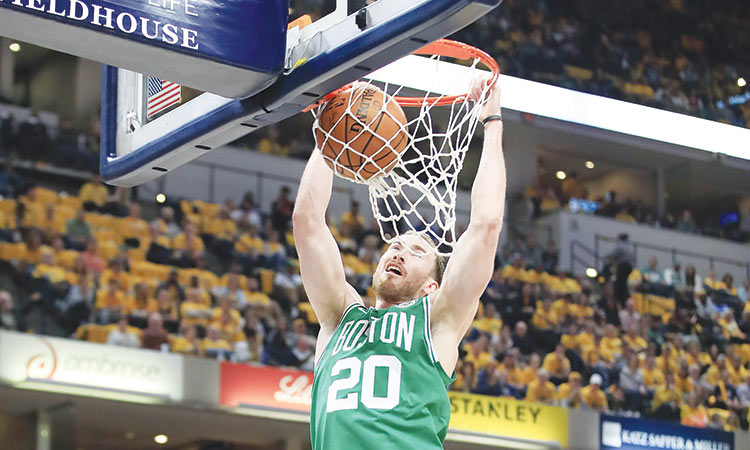 Boston Celtics’ Gordon Hayward (20) in action against the Indiana Pacers during game 4 of the 1st round of the 2019 NBA Playoffs on Sunday. Agence France-Presse

The Boston Celtics swept their way past Indiana, while the Golden State and Toronto registered road victories over Orlando and the Los Angeles Clippers to take commanding leads in their first round playoff series on Sunday.

Gordon Hayward scored a team-high 20 points as the Celtics defeated Indiana 110-106 on Sunday to complete a first-round NBA playoff sweep of the host Pacers.

Kevin Durant and Klay Thompson steered the Warriors to victory over the Clippers 113-105, and Kawhi Leonard put on a show as the Raptors routed Orlando 107-85, putting division winners Golden State and Toronto up 3-1 in their series and on the brink of advancing to the next round.

Here’s the deal for the Magic and the Clippers. There have been 11 teams to successfully rally from a 3-1 series deficit in a best-of-seven series, and of those, only three pulled it off by winning a game seven on the road which is what they would have to do. The Celtics captured their first best-of-seven series sweep since 2011 and advanced to a second-round match-up with either the Milwaukee Bucks or Detroit Pistons.

“Any time you 4-0 a team, you feel great,” Hayward said. “We’re going to heal up a little bit and be ready for the next round.”

The Bucks, who had the NBA’s best regular-season record, own a 3-0 series edge on Detroit and can complete a sweep of their own on Monday.

Elsewhere, Durant scored 33 points and the Warriors who held on to beat the Clippers.

After winning both games in Los Angeles, the Warriors can wrap things up in game five on Wednesday in Oakland. Thompson scored 27 of his 32 points in the first half for the Warriors. Stephen Curry had an off night shooting 3-for-14, including 1-of-9 from 3-point range, and finishing with 12 points.

Shai Gilgeous-Alexander scored a season-high 25 points for the Clippers.

The Warriors have led by at least eight points after the first quarter in every game of the series.

In Orlando, Leonard scored 34 points and the Raptors beat the Magic.