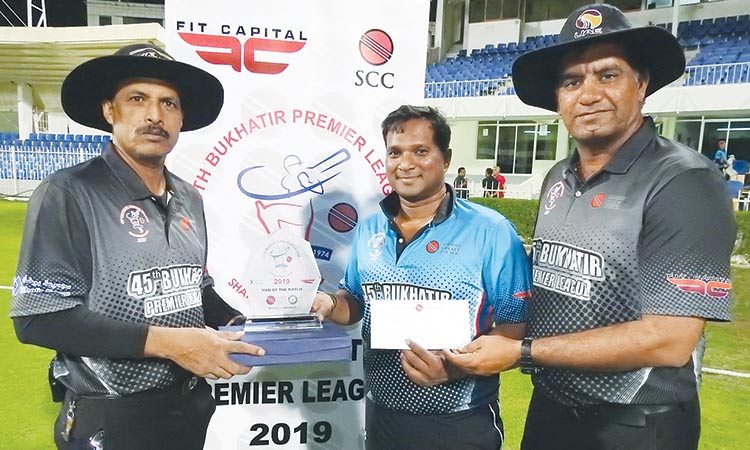 Senthil Prabhu receives the man of the match award from dignitaries.

Chasing 239 to win which was set by Starlets, the opening batsman almost single handedly won it for Fly Emirates after he plundered 102 not out from 116 balls which included 11 hits to the fence and one which soared above it.

Prabhu and Sumtih Kumara added 48 runs for the opening wicket of which Kumara blasted 31 runs from 18 balls (4x4, 2x6) before heading back to the pavilion. Then Prabhu and Abhijeet Joshi clubbed 32 runs with Bhatia’s contribution being only 12.

Later Prabhu and Saqlain Haider got into the act and runs started to flow at will. Their 102 run partnership for the third wicket took the match away from Starlets. Haider was equally dominant striking 59 from 65 balls with seven fours.

After he departed Wajahat Rasool gave Prabhu company with 28 from 24 balls (1x4, 3x6) and together they saw their team home in 39.4 overs.

The tournament is being organized by Ocean Fair Sports Club.

In the first match, Jotun Paint beat ENBD by 76 runs.

Batting first, Paint scored 240 for the loss of two wickets in 20 overs.

Ranjith Mani was top scorer with 125 off 52 balls. He belted eight sixes and eight fours.  Other top scorer were Vishnu Ramesh 88 off 53 balls.

Mohammed Ismail and Santosh Pillai took one wickets each. Chasing, ENBD fail to reach and could manage to reach only 164 all out  in 18 overs.

Haroon Hanif 39, Anuj Thakur 28 were the main scorers for them. Irfan Zika and Aron Menon took two wickets each.

In another match, ANIB defeated Arabian Ranchers by nine wickets.

Batting first , Arabian Ranchers posted 86 for all out in their allotted 20 overs. Mujahd Ali (20) was the only batsman, who could put up some resistance against  ANIB bowling. Anurag Nishad was the wrecker in chiefas he returned with a figure of three for 6, Naveed Ahmed, Mohsen Arif, Neville Pereira and Mohmmed Imran , also took two wickets each.

ANIB chased down the modest target in just 13 overs for the loss of one wicket only. Captain Rajagopal struck a fine 25 and Mohsen Arif scored a splendid an unbeaten 42 to guide their team to an easy victory.