Atletico extend lead over Real with win against Eibar - GulfToday

Atletico extend lead over Real with win against Eibar 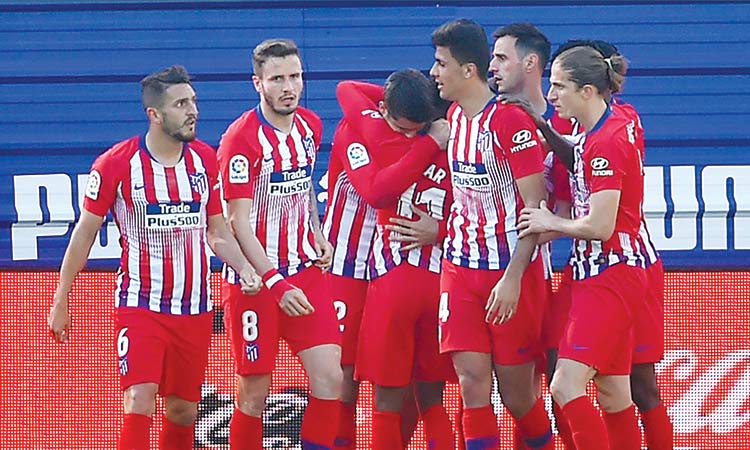 Atletico Madrid needed Thomas Lemar to come off the bench and score an 85th-minute winner against Eibar on Saturday as they stretched their lead over Real Madrid to seven points in La Liga.

Real play at home to in-form Athletic Bilbao on Sunday but Atletico took another step towards finishing above their city rivals for a second consecutive year by squeezing past Eibar 1-0 at Ipurua.

Without Antoine Griezmann and Diego Costa, who were both suspended, Diego Simeone’s side looked set for a stalemate that would have given Real at least a sniff of second place.

Instead Lemar, on as a substitute, tucked home at the back post to end Eibar’s resistance and reduce the gap behind run-away leaders Barcelona to six points.

Eibar have now won only once in their last eight games and stay 13th.

Barca host Real Sociedad later on Saturday and it would take an incredible collapse for the Catalans to be caught. If they beat Real Sociedad, Alaves on Tuesday and Levante next weekend, an eighth league title in 11 years will be confirmed.

But, in the same week that goalkeeper Jan Oblak signed a new contract, this victory comes as another boost to morale for Atletico, who have now won four out of their last five matches.

Lemar’s goal will have done his confidence no harm either, after a difficult debut season with Atleti, who paid 60 million euros to sign the Frenchman from Monaco last summer. Simeone will hope for more from the 23-year-old next term.

Atletico created the only real chance of the first half and Angel Correa missed it, slid through by the busy Alvaro Morata only to see his finish saved by the feet of Marko Dmitrovic.

Morata should have scored himself shortly after half-time but dragged his shot wide of the far post while Koke’s long-range effort had to be palmed over.

Sergi Enrich might have nicked it for Eibar had Diego Godin not intercepted at the front post and when Godin drew another excellent save from Dmitrovic after heading Koke’s free-kick towards the corner, it seemed the hosts would hang on for a point.

But Eibar’s defence was caught too high with five minutes left as Morata threaded Koke through and he crossed to the back post, where Lemar was free to score the winner.